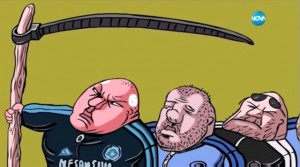 Bulgarians are accusing the privately-owned TV network NOVA of bowing to government pressure last week when it removed all of cartoonist Chavdar Nikolov’s work from its website. Nikolov’s latest animated political cartoon had mocked Prime Minister Boyko Borisov’s apparent support for vigilante “migrant hunters” who carry out citizens’ arrests of refugees at the Bulgarian border.

NOVA TV is owned by the Swedish company MTG, and run by a Frenchman named Didier Stoessel. Nikolov had been under contract to regularly provide cartoons and videos for the websites, and Stoessel has said they were all deleted simply because of an unrelated decision to end the contract based on site traffic. Reporters Without Borders calls that claim “grotesque,” and Nikolov says he was informed of the contract cancellation only after the migrant video had been removed. In a statement on its website, Reporters Without Borders demanded that Nikolov’s work be restored:

A media outlet’s management has a duty to maintain the editorial independence of the journalists who work for it. Didier Stoessel’s claim that the cartoonist’s contract had simply ended is grotesque. The media must participate in the democratic debate, which includes this kind of cartoon. Media freedom is not a trite formula. It is incredible that media outlets must be reminded of their duty to respect it. All of Nikolov’s cartoons must be restored to the website.

Hundreds of Bulgarians agreed, rallying in support of Nikolov in the capital city of Sofia last Friday. Prime Minister Borisov, meanwhile, denied pressuring NOVA to remove the cartoons. Nevertheless, he has previously exhibited some sensitivity where cartoons are concerned. When asked about the Nikolov case specifically, Borisov complained that multiple cartoonists “‘have made a living’ off his name and image for more than ten years,” starting when he was mayor of Sofia. The Prime Minister is a former bodyguard and current professional soccer player (the oldest in Bulgarian history at 54 years old), and is often caricatured as an authoritarian meathead.