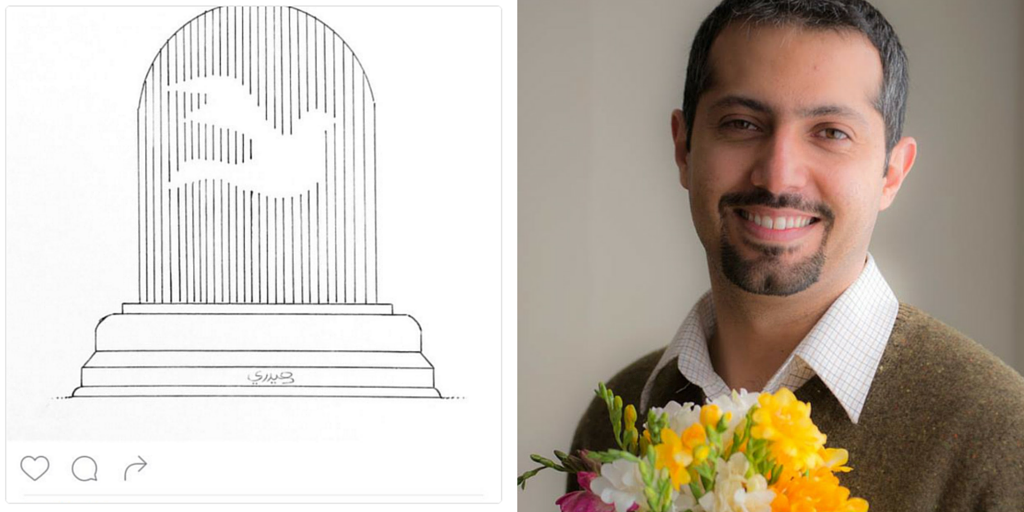 Just a few days after we got word that Atena Farghadani is set to be released from an Iranian prison next month, her countryman and fellow cartoonist Hadi Heidari has been freed after he was re-arrested on a previous charge in November.

Heidari announced his release yesterday with the cartoon shown here and a brief message on Instagram:

Some sources have drawn a link between Heidari’s most recent arrest and a cartoon that he posted on Instagram, mourning the victims of the Paris attack, but it’s not at all clear the two were related. Iran’s rulers are not sympathetic to ISIS, and President Hassan Rouhani quickly condemned the attacks. While Iranian hardliners are nevertheless “wary of any perceived expression of friendly overtures to secular Western countries, which they might have thought the cartoon conveyed,” it appears more likely that Heidari was arrested in retaliation for his domestic reformist advocacy.

Like Farghadani, Heidari first came to the government’s attention in 2009, when he was involved with the Green Movement that arose after the disputed re-election of then-President Mahmoud Ahmadinejad. He was arrested in 2009 for “assembly and collusion against national security” and in 2010 for “propaganda against the state,” but not convicted on either count.

In 2012, though, a national furor arose in response to his cartoon “The Blindfolded Men.” Heidari’s opponents say the men are soldiers in the Iran-Iraq War of the 1980s and that the cartoon implies the military was misled, but he denies that they represent soldiers, pointing out they’re not wearing military uniforms. Nevertheless, Heidari was called into court, the manager of Shargh Newspaper which published the cartoon was arrested, and the newspaper itself was temporarily banned.

While the release of the two cartoonists is certainly welcome news, it does not necessarily signal a universally improved climate for freedom of expression in Iran. Rouhani has voiced support for increased media freedoms, but he does not hold much sway over the court system. Just yesterday, in fact, four journalists were convicted of spreading propaganda (specifically, “paving the way for US infiltration of the country”) and sentenced to between 5-10 years in prison.