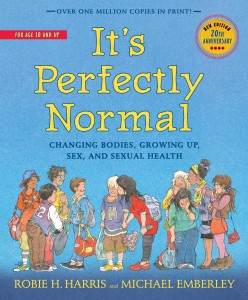 The classic — and frequently challenged — sex ed book It’s Perfectly Normal by Robie Harris has reportedly been removed from an elementary school library in Rainier, Oregon, and the librarian who included it in the collection has been disciplined by school administrators despite the book’s presence on a statewide list of approved materials. Moreover, the ban apparently is not limited to one title, as the school’s principal assured parents that “all questionable books have been pulled from library shelves.”

According to the Rainier School District’s official version of events, sixth-grade students at Hudson Park Elementary School had looked at copies of It’s Perfectly Normal during a class session in the library, with their teacher’s approval. All parties agree that a subsequent class of fourth graders (generally 9-10 years old) also read the book, but the school district claims the copies were left out by accident, while both supporters and detractors of the librarian say the books were deliberately shared with the fourth grade class. A parent who regularly volunteers in the library commented on local news station KPTV’s article with her account of events:

Our librarian did nothing wrong. She was asked to buy the material and sent the list for review first. Our district wasn’t prepared for Sex Ed classes coming up and didn’t give employees guidelines for books, didn’t tell them to get permission slips. Our librarian used common sense and never let the books hit the shelves. She kept them behind desk, offering them to [the] 3 older grades only, and talked to teachers first. The discipline was for letting 4th graders look at books AFTER talking to the teacher.

Regardless of who saw the book when and why, the district seems to agree that the librarian followed proper procedures in adding it to the collection in the first place. In that case, there is a challenge policy which should have been followed before the book could be removed from the library. Rainier School District Policy IIA-AR, Section 2 (Objections to Instructional Materials) includes multiple levels of review and can be summarized as follows:

Instead of following this policy, which is designed to ensure that books are not rashly removed from libraries and classrooms, Hudson Park principal Heidi Blakley said in a letter to parents that “inappropriate human development and sexuality books were disseminated to students who had library [class],” but that “all questionable books have been pulled from the library shelves.” According to the parent library volunteer commenting on KPTV’s article, administrators have now removed not just It’s Perfectly Normal but “all ‘body books,’ including those that discuss growing girls and menstruation with no mention of sex, and [are] in the process of collecting books that honor GLBQT youth and families.” The librarian has refused to participate in the purge, added the parent.

The librarian herself, Alison Leigh Dale-Moore, also commented on the local news story. While trying to remain above the fray, she noted that she is in contact with ALA’s Office for Intellectual Freedom, the National Coalition Against Censorship, and her union representative. She finished by telling detractors that “I abide by The American Library Association Code of Ethics. Look it up.” CBLDF stands with Dale-Moore and urges the Rainier School Board to invoke the challenge procedure, which has evidently been ignored by school and district administrators. This fight is far from over!