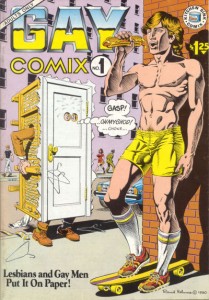 Whether it be standing up for women’s rights, partaking in explicit sexual fantasies, or voicing political dissent, the underground comix movement of the 1960s and 1970s saw the boundaries of the comics medium blown wide open. Along with giving rise to some of the industry’s greatest creators and laying the foundation for what has become the independent comics scene today, the undergrounds also fostered the development of the queer comix movement — a wholly new and unique space where LGBTQ youth could, for once, express themselves and speak out freely about social issues directly impacting the LGBTQ community.

A recent article from Geeks Out explores the history of LGBTQ comix and how ironically the censorship imposed by the Comics Code Authority (CCA) in 1954 inadvertently led to the production of a group of very out and very proud comics that not only challenged all the rules and regulations the CCA attempted to enforce, but also stood up to and defied many of the negative stereotypes and assumptions made about members of the LGBTQ community during a time when society feared anything that deviated from a perceived straight and strict moral compass.

In the aftermath of the 1954 Senate Subcommittee Hearings and America’s widespread crusade against comics, many children who had grown up with and who were creatively inspired by the pre-Code comics of the 1950s were forced to find other avenues of expression outside the purview of the CCA and Comics Code. Inspired by the comics of EC and satirical works of Harvey Kurtzman — the creator of MAD magazine — that space became the underground, and in the 1960s, with the successful publication of works like R. Crumb’s Zap Comix, the underground comix movement was born. 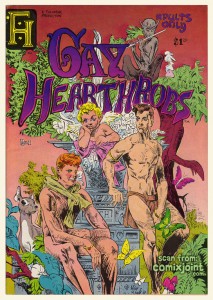 An empire of free expression built on self-published zines and xeroxed comic pamphlets distributed through head shops and other unconventional channels, the creators of the undergrounds tackled any and all topics they wanted to with no concern or care for the censorship holding back the mainstream comics industry. Often explicit, raw, and emotionally revealing, the underground comix movement birthed the autobiographical graphic memoir as well as some politically-charged narratives that directly took on issues of civil rights, the AIDs epidemic, and self-identity. “In the case of queer comix, publications and zines became a way for the LGBT community to produce content that concerned them,” explains Geeks Out. “The subjects ranged from biographies, to coming out stories, to reactions to the AIDS epidemic, and more. These pieces showcase a variety of lifestyles and identities, demonstrating that the queer world is as wonderfully diverse then as it is now.”

From Gay Hearthrobs, the first all-gay comic, published by Black comics creator Larry Fuller, to the successful Gay Comix underground anthology that included the works of Alison Bechdel, Lee Marrs, and Trina Robbins, underground comix represented a space that LGBTQ youths could truly be themselves and set the stage for the numerous LGBTQ comics that we enjoy and celebrate today.

By choosing free expression instead of kowtowing to the CCA’s decades long campaign of censorship, LGBTQ creators laid the foundation for a whole new generation of artists and writers today to continue to tell their stories. As Geeks Out notes:

Censorship usually leads to the suppression of ideas, but it is because of censorship laws that this movement began… Because these individuals stood up to censorship we have representation in mainstream comics. But more importantly, because of these creators and artists in the queer comix movement, we know our representation can be better.