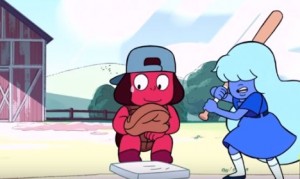 Over 1,300 Swedish fans of the Cartoon Network show Steven Universe have signed a petition objecting to dialogue changes in the Swedish-language version of a recent episode that effaced a same-sex flirtation between the characters Ruby and Sapphire. The network acknowledges the changes, but says they were necessary to comply with unspecified Swedish content ratings.

In the original version of the recent episode “Hit the Diamond,” Ruby and Sapphire trade flirtatious banter while playing baseball. At one point Sapphire complains that she can’t concentrate on the ball because “all I wanna look at is [Ruby],” to which Ruby responds that “you can look at me while you’re running for home.” In the dubbed Swedish version, however, Sapphire simply says that she has “problems with concentration” and Ruby tells her to “focus on victory when you run around.”

The fan petition points out that this editing choice seems particularly out of place in Sweden, which “is known worldwide for being progressive in its views and accepting of LGBTQ+ people.” A statement issued by Cartoon Network owner Turner Broadcasting, however, alluded to differences in content ratings between the US and Sweden:

Cartoon Network often airs edited versions of programmes from the American originals due to a number of factors, including the fact that US networks use different ratings systems. As a channel we celebrate diversity, which can be seen in many of our programmes and characters. We do not aim in any way to censor scenes where same-sex relationships are shown and we are proud that our programmes have many healthy role models for children to relate to.

But it’s unclear which Swedish content ratings might require such a change. Sweden has no comprehensive TV ratings system similar to the US TV Parental Guidelines. Given that Swedish educational TV has recently featured dancing genitals and singing tampons, it is difficult to imagine that a mild same-sex cartoon flirtation represented a bridge too far for any government regulators there. Moreover, the petition pointed out that innuendo between the two characters in previous episodes had been faithfully translated. Whatever the reason for the change in this case, the signatories asked that Cartoon Network “promise in writing to never again censor Ruby and Sapphire’s relationship through translation or otherwise.”