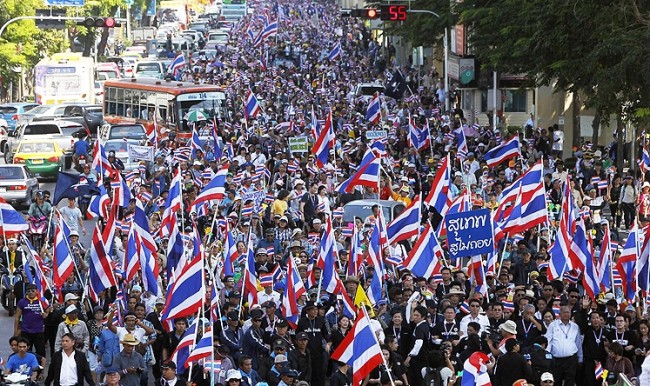 A Thai political cartoonist and his editor at a weekly news magazine have been summoned to meet with government election commissioners this week and explain a cartoon that mocked a previous draft of Thailand’s nascent constitution. Even though the cartoon was first published 10 months ago and that draft has since been voted down by the council charged with approving it, a commissioner said that Arun Watcharasawat must appear in person to “explain whether the incident was a misunderstanding, and explain the intentions behind it.”

Since 2014, Thailand has been ruled by a military junta with the appropriately Orwellian name of National Council for Peace and Order (NCPO). The junta dissolved the previous legislative body, repealed most of the existing constitution, and continues to exert control over the judiciary. NCPO implemented an interim constitution in 2014 and intends to eventually replace it with a permanent one, but has hit unexpected resistance: a majority of its handpicked National Reform Council voted against the first draft last year. According to the provisions of the interim constitution, that meant the drafting had to start over from scratch with a new Constitutional Convention–also selected by NCPO, of course.

Thai citizens will vote on that second draft of the constitution with a referendum in August, but there’s not much doubt as to the outcome since NCPO has shut down independent election monitoring stations and banned any campaigns that “mislead” the public into voting against the draft. That recently-implemented referendum law appears to be the grounds for Watcharasawat’s summons at this time, since the news magazine Matichon Weekendreposted a collection of his previous constitution-related cartoons on Facebook last week. Depending on how the cartoonist and his editor respond to questions from election commissioners at the meeting set for this Thursday, both could face charges under the law.

Another Thai political cartoonist, Sakda Sae Iew who uses the pen name Sia, was called in for “attitude adjustment” at army headquarters last October after one his cartoons mocked Prime Minister Prayuth Chan-ocha’s lip service to civil liberties at a United Nations event abroad while his government violated those very same liberties back in Thailand. Today Sia is still working, secure in the knowledge that “the content of my cartoons is based on the news I read. It’s not like I am making it up.” Nevertheless, he gets near-daily warnings from editors at Thai Rath, the newspaper that publishes his work, and admits that he also self-censors much more than he used to. But he’s proud to say that the junta was right when it labeled him biased:

I actually do take sides. For three decades I have stood by the same position, which is democracy and justice. I’m against all kinds of violence and dictatorship. Everyone is equal and has the same rights. If you don’t like the government, then the system already allows you to get rid of them in four years.