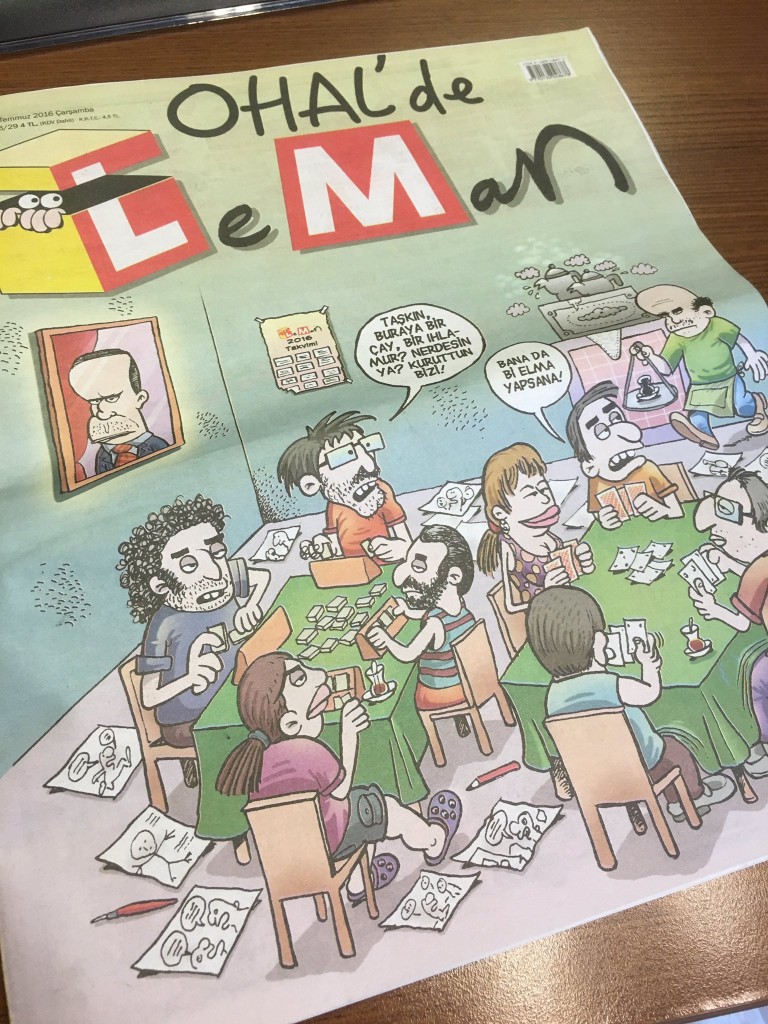 The Turkish government’s media crackdown continues this week, thinly justified as a “cleansing” after the failed coup attempt of July 15-16. In the past few days, more than 130 press outlets have been shut down and arrest warrants issued for 89 journalists and media executives, with at least 48 arrested so far. The editor of satirical magazine Leman, which was banned from distributing a post-coup special edition last week, tells the BBC he feels it’s only a matter of time until his staff becomes the target of a Charlie Hebdo-style attack.

When the attempted coup was launched by a minority of military members two weeks ago, every group politically opposed to President Recep Tayyip Erdoğan quickly disavowed any involvement, citing respect for the democratic process that put him in office two years ago even if they disagree with his subsequent actions. External analysts and media still have not been able to discern exactly who orchestrated the attempt, but the president blames followers of Fethullah Gülen, a cleric and former Erdoğan ally who now lives in exile in Pennsylvania. The Gulenists have long been favored scapegoats of the government, being cited for example in the state takeover of the Feza Media Group in March. Leman editors also suggested via Twitter that the censorship of their special edition may be due to their previous coverage of Gülen.

In an interview with the BBC, Leman editor Zafer Aknar said that the magazine began receiving threats from Erdoğan supporters on social media shortly after the post-coup cover was released online. Soon they also began massing in the street outside the Leman offices, which were nearly overrun before the police appeared at the last minute to head them off. Even though the threats have continued since that time, Aknar says police have been conspicuously absent, leaving the staff to fend for itself. Additionally, the crackdown on other media outlets has ensured that the attack against Leman has not been publicized within Turkey.

After the magazine was banned from distributing the special edition with a cover cartoon suggesting that the government deliberately pitted civilians against the military plotters, this week it instead released the “state of emergency” edition seen here, which shows cartoonists and other staff drinking tea and playing cards since they have nothing else to do. The magazine’s website is also among at least 30 that have been shut down by government order in the past two weeks.