Comic-Con kicks of Wednesday with Preview Night, and CBLDF is ready to rumble! Kick Comic-Con off is style at our Comic-Con Welcome Party, bid on original artwork at the Comic-Con Art Auction, catch a CBLDF panel every day of con, and take home awesome convention exclusives! You’ll find us at booth #1918 all week with signed premiums galore, all in support of our important First Amendment work. 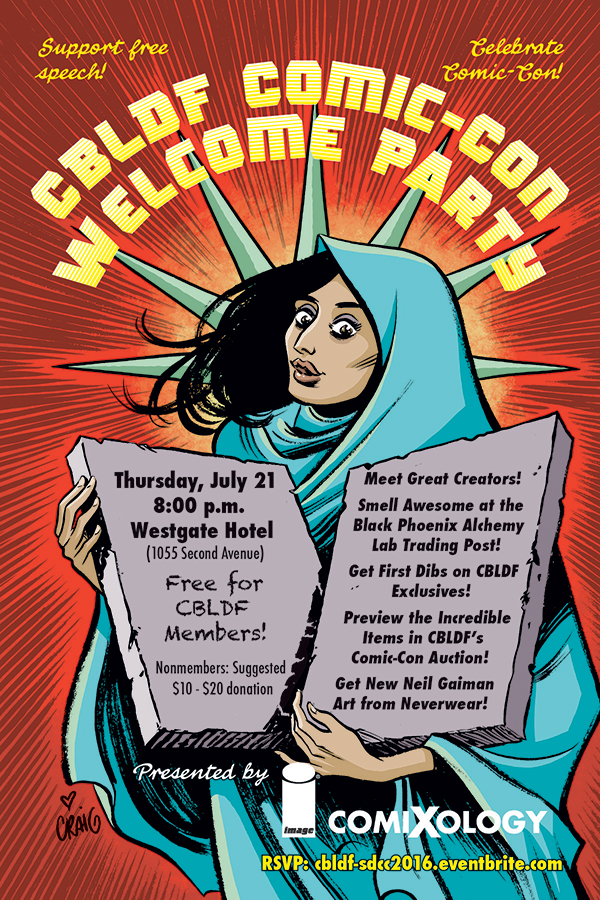 Kick-off Comic-Con with comics’ greatest creators at the Comic Book Legal Defense Fund’s Comic-Con Welcome Party, sponsored by Image Comics and comiXology, with a special gallery display from Black Phoenix Alchemy Lab! The fun starts at 8:00 p.m. on Thursday, July 21, at the Westgate Hotel, where CBLDF welcomes you to Comic-Con for a night of amazing creators, astonishing artwork, and outstanding exclusives! RSVP now: https://cbldf-sdcc2016.eventbrite.com

Get the Exclusive Goods! The first 100 attendees will receive a free gift bag, with exclusive items from Image Comics, comiXology, and CBLDF!

Get First Dibs on CBLDF Exclusives! CBLDF has been working hard to put together an exclusive assortment for Comic-Con attendees! We have all-new Comics Code patches and pins commemorating five years gone!

Get New Neil Gaiman Art From Neverwear! Neverwear has an ever-growing line of items based on the works of author Neil Gaiman and is an ardent supporter of CBLDF! Proceeds from sales at the CBLDF Welcome Party benefit CBLDF! 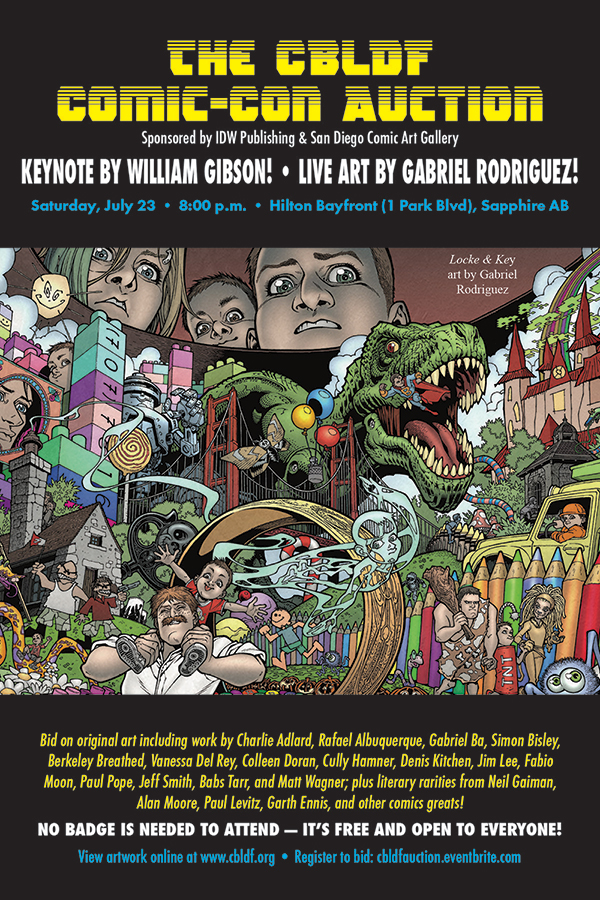 It’s time for Comic-Con, and that means it’s time for CBLDF to lay down some education with panels at both the convention center and the San Diego Central Library! Whether you’re looking for the latest censorship news, tips for using comics in education, information about censorship and the law, or the always exciting CBLDF Live Art Jam, we’ve got it and more!

CBLDF Editorial Director Betsy Gomez will lead a panel of librarians, educators, and creators in a lively discussion of how and why graphic novels are attacked by censors. They’ll detail how and why graphic novels can be successfully integrated into classroom curricula, and they’ll provide tools that educators can use to counter these attacks. Participants will leave the panel better enabled to advocate for their instructional materials and their students. Panelists include Carla Riemer (Librarian, Claremont Middle School, Oakland, California), Katherine Keller (TDRL Evening & Weekend Supervisor, University Libraries, UNLV), and Matthew Holm (artist, Babymouse, Squish, Sunny Side Up), and Judd Winick (Hilo: The Boy Who Crashed to Earth; The Adventures of Barry Ween, Boy Genius).

Sixty years ago, E.C. Comics threw in the towel, shuttering everything but Mad Magazine when the Picto-Fiction titles failed to reach an audience. Although defeated by the Comics Code and the moral panic of the 1950s, E.C. left an indelible mark on the comics medium that’s still felt to this day. Join special guest artists, who will create art in tribute to the E.C. tradition before your eyes. These great creators will share their perspectives on censorship and make once-in-a-lifetime art to benefit the Fund’s important work defending the right to read comics. Get a chance to watch live art being created, learn about censorship, and bid to win the pieces made during the panel! All proceeds benefit the Comic Book Legal Defense Fund.

We’ll see you at booth #1918 for Comic-Con International in San Diego!