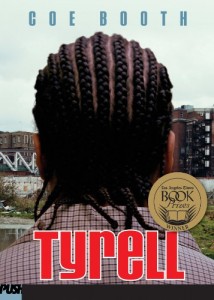 CBLDF yesterday signed on to a letter from the National Coalition Against Censorship to the superintendent and school board in Chesterfield County, Virginia, defending several summer reading books that were challenged for “sexually explicit” content and urging the school district not to adopt warning labels or ratings for books, as some parents have demanded.

Although the censorship campaign against optional summer reading books was initiated by other parents, it has been adopted with gusto by State Sen. Amanda Chase, who has three children enrolled in Chesterfield County Public Schools. Chase first suggested that the librarians who compiled the recommended lists should be fired and books such as Eleanor and Park by Rainbow Rowell, Dope Sick by Walter Dean Myers, and Tyrell by Coe Booth removed from school libraries altogether. Later she added that future summer reading lists should include warnings for parents on books that may be controversial. The concept is similar to a bill that passed through Virginia’s state assembly earlier this year before it wasvetoed by Gov. Terry McAuliffe.

The school district already caved to pressure from a vocal minority of parents and replaced this year’s lists that had been compiled by district librarians with links to third-party sites including YALSA, Scholastic, and Read Kiddo Read. But even that appeasement did not satisfy Chase; because some of the critically praised books from the original lists also appear on the third-party sites, she says that “it’s the same thing” as the district recommending those titles directly.

In the letter sent yesterday afternoon, NCAC defended the particular books that have been challenged in this case and laid out the reasons why content ratings or “red-flagging” of books is a bad idea overall. After pointing out that both the National Council of Teachers of English and the American Library Association are strongly opposed to red-flagging, NCAC explained the effect that the practice has on students’ education:

Labels such as ‘sexually explicit’ or ‘violent’ emphasize decontextualized passages and do tremendous disservice to the works they accompany by detracting from students’ understanding and appreciation of the works as a whole. They also inevitably invite demands for alternative assignments, which in turn encourage teachers to avoid selecting valuable literature that some parents might consider offensive. As the Ninth Circuit observed in Monteiro v. Tempe Union School District, supra, 158 F.3d at 1028 n.7, ‘due to the practical burdens, schools would be unlikely to choose to teach alternate works separately to students objecting to a portion of the curriculum. Instead, they would probably simply remove books that they believed to be educationally valuable, but that might be controversial, or offensive to some.’

Finally, the letter also reminded Chesterfield officials of the provisions laid out in the district’s policy on challenges to instructional materials, which begins with the complainant meeting with a principal and librarian before submitting a written form for each challenged work. If the issue is not resolved in the initial meeting, then the challenge is to proceed to a school-level review committee. If the complainant is still dissatisfied with the outcome there, then they may appeal to a district-wide review committee which makes the final recommendation. In this case, however, district officials have disregarded the challenge policy and allowed a group of parents to challenge three books at once via oral complaint at school board meetings. Illogically, a CCPS spokesman claimed that the policy does not apply simply because the complaints “were directed at the division level and not directed at a school.” NCAC’s letter warned that this practice “creates a precedent encouraging future complainants to appeal directly to the Board by-passing the need for a written complaint and school level review.”

Check out the full letter below, and stay tuned for updates!

Chesterfield Letter by betsy.gomez on Scribd