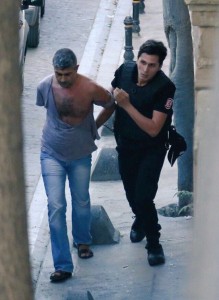 Turkish-born cartoonist Dogan Güzel has been arrested in Istanbul along with more than 20 colleagues from the Kurdish newspaper Özgür Gündem, which has also been shut down by government order. Güzel, the recipient of Cartoonists Rights Network International’s very first Courage in Editorial Cartooning Award in 1999 and now a naturalized Spanish citizen, happened to be visiting his friends and co-workers in Turkey when police raided the newspaper.

The forced closure of Özgür Gündem is yet another development in Turkish President Recep Tayyip Erdoğan’s crackdown on media following a failed military coup last month. Dozens of journalists have had their credentials revoked, and the satirical magazine LeMan was prevented from printing a special post-coup edition with a cover cartoon suggesting that the government deliberately pitted civilians against the military plotters. The editor of LeMan told the BBC he feels it’s only a matter of time until his staff becomes the target of a Charlie Hebdo-style attack by Erdoğan’s supporters.

As a Kurdish publication, Özgür Gündem was already on Erdoğan’s bad side well before the failed coup. The Turkish government is waging a bombing campaign on Kurdish fighters along the Syrian and Iraqi borders (the same Kurds who are the U.S.-led coalition’s most effective ally against ISIS within those countries), and an Istanbul court this week ordered the paper shut down because it was “allegedly acting as ‘mouthpiece’ of the outlawed Kurdistan Workers’ Party (PKK) and was therefore publishing ‘a terrorist organization’s propaganda.’”

Güzel, himself a Kurd, has previously spent more than a year in prison for “drawing a cartoon that called the state ‘weak,’ and for publishing his cartoons in the Kurdish language.” In 2012 he successfully sought political asylum in Spain, but had regularly returned to Turkey since then to visit friends and co-workers, as at the time of his arrest this week. Although he has not been formally charged with anything, he is expected to be detained at least through Friday. As of yesterday afternoon, Spanish embassy officials in Turkey had not yet been able to get in touch with Güzel’s lawyer.

One of the journalists arrested along with Güzel, Özgür Paksoy, was also detained at a checkpoint last month for questioning over a cartoon he had allegedly shared on social media. The cartoon is by Carlos Latuff and suggests that Erdoğan was linked to last year’s fatal shooting of Tahir Elçi, a prominent pro-Kurdish lawyer and rights activist. Elçi was killed just after making a public press statement “calling for an end to violence between the Turkish state and the Kurdish rebel group.” Paksoy was allowed to go free last month after several hours of questioning over the cartoon.