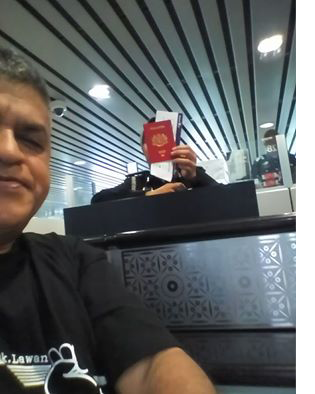 The Malaysian government’s censorship campaign against political cartoonist Zunar entered a new phase today: when he attempted to catch a flight to Singapore for a public forum, he discovered that he’s been barred from leaving the country on direct orders from Inspector General of Police Khalid Abu Bakr. Zunar’s trial on nine counts of sedition is currently set to begin on November 22, but has already been delayed multiple times.

Abu Bakr apparently ordered the travel ban on June 24, but Zunar was not notified of it until he tried to leave the country today. In a statement published at Cartoon Movement’s blog, the cartoonist said he intends to launch a legal challenge to the travel restriction, citing Article 12 of the UN’s International Covenant on Civil and Political Rights to which Malaysia is a signatory. Asked for comment by the Malay Mail newspaper, Abu Bakr replied that “he can challenge me if he wants. No problem.”

If convicted on all nine counts of sedition, Zunar could face up to 43 years in prison. The charges stem from statements that he made on Twitter last February following the sentencing of opposition leader Anwar Ibrahim on a trumped-up sodomy charge. The cartoonist hinted that the judiciary in that trial had been subject to political pressure or bribery, observing that “the lackeys in black robes are proud of their sentences. The reward from political masters must be plenty.” He then exchanged Twitter barbs — and a cartoon — with Abu Bakar as officers were en route to arrest him.

The trial has been delayed partly due to Zunar and his lawyers’ challenge of the Sedition Act, implemented during the British colonial era and before Malaysia had its own constitution, on the grounds that it “contradicted the constitution’s guarantee of free speech.” The High Court disagreed and said it had already addressed the question in rejecting a previous challenge by law professor Azmi Sharom, also charged with sedition. In February, however, Attorney General Mohamed Apandi Ali withdrew the sedition charge against Azmi, which had been pending since 2014.

Following news of the travel ban, Zunar’s lawyer Eric Paulsen said it was “arbitrary and done in bad faith,” since they have never missed a court date and Zunar has never given any indication that he would try to escape trial. In fact he is indignant at the very suggestion of seeking asylum elsewhere, maintaining that he has an obligation to stay and try to change Malaysia for the better: “the world is watching my trial….I want to expose this for my country, not for me alone, and the government will get an official trial. This is my responsibility.”

Despite the travel ban, Zunar’s courage and sense of humor were undaunted today. After snapping a selfie with an immigration official holding up his documents in the background, he finished his statement at Cartoon Movement with the declaration that “they can ban my books, they can ban my cartoon, they can ban me from traveling, but they cannot ban my mind, I will keep drawing until the last drop of my ink.”