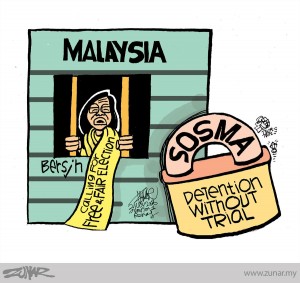 Malaysian cartoonist Zunar, currently facing nine separate sedition charges for statements he made on Twitter last year, announced yesterday that his latest challenge to the country’s Sedition Act will proceed on January 24, 2017. If the challenge fails and he is convicted in a subsequent trial, he could face up to 43 years in prison.

According to Cartoonists Rights Network International, Zunar notified supporters of his next court date via email this week. He is currently barred from leaving the country after Inspector General of Police Khalid Abu Bakr personally ordered a travel ban in June. The sedition charges stem from statements that Zunar made on Twitter last February following the sentencing of opposition leader Anwar Ibrahim on a trumped-up sodomy charge. The cartoonist hinted that the judiciary in that trial had been subject to political pressure or bribery, observing that “the lackeys in black robes are proud of their sentences. The reward from political masters must be plenty.” He then exchanged Twitter barbs — and a cartoon — with Abu Bakar as officers were en route to arrest him.

The criminal trial has been delayed several times partly due to Zunar and his lawyers’ challenge of the Sedition Act, implemented during the British colonial era and before Malaysia had its own constitution, on the grounds that it “contradicted the constitution’s guarantee of free speech.” The High Court disagreed and said it had already addressed the question in rejecting a previous challenge by law professor Azmi Sharom, also charged with sedition. In February, however, Attorney General Mohamed Apandi Ali withdrew the sedition charge against Azmi, which had been pending since 2014.

This past week Malaysia has seen mass protests from the anti-corruption Bersih movement, which opposes Prime Minister Najib Razak’s government. Numerous activists have been arrested, most prominently including 60-year-old Maria Chin Abdullah who was detained under an anti-terrorism law that allows her to be held for up to 28 days without trial. Zunar featured Abdullah in two of his most recent cartoons, including the one shown here.

← Giving Thanks for the Freedom to Read!
DEFEND FREE SPEECH With New T-Shirt Available For Preorder Now →