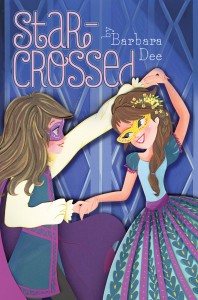 Sadly, the phenomenon of authors being disinvited from previously scheduled school visits because of their writing or opinions is nothing new–in the past few years, it’s happened to Rainbow Rowell, Phil Bildner, and Meg Medina, to name just a few. But recently middle-grade author Barbara Dee found herself in the supremely absurd situation of being asked to stop talking about her book in the midst of a day full of book talks. The reason: Dee’s newly released novel Star-Crossed features a romance between two girls.

Dee wrote about the crushing experience in a post on the blog Nerdy Book Club, recounting how she had been invited back to the same middle school (which she chooses not to identify) for the third year in a row. During the first two class periods she read excerpts from her September 2016 release Truth or Dare–which deals with the pressure on middle school girls to “keep up” with their peers–and from Star-Crossed, which was published on March 14. Following the readings in each class she spoke with students in open Q&A sessions.

Before the third class, however, a teacher pulled Dee aside and suggested that “some of the kids are too young for the content” in Star-Crossed. Confused, she pointed out that the book’s publisher Simon & Schuster recommends it for grades 4-8; that it’s been licensed by Scholastic to be sold at school book fairs; and that it’s received positive reviews in School Library Journal and Kirkus Reviews. The teacher then admitted that the real concern was “a fear of parental backlash.” Dee, a former teacher herself, reports that another teacher chimed in to say that “we thought it was great when you spoke about inclusion and tolerance and the need for diversity in kidlit,” but asked her to “keep it general.”

Reeling in shock, Dee considered her options for the rest of the day:

A) Talk about STAR-CROSSED, despite the objections of the teachers?

C) Proceed, not talking about the book and not reading an excerpt, despite having a big poster of the cover art on the desk beside me?

D) Proceed, briefly and matter-of-factly mentioning what STAR-CROSSED was about, but not reading an excerpt and quickly pivoting?

For the third class session, she chose option C: not mentioning her brand-new book at all in the main part of her talk. But feeling an overwhelming sense of betrayal–to herself, the book, and students who might be interested in reading it–she pivoted to option D for the final two classes. Even so, the day ended on a sickening note for Dee:

Afterwards, I got into my car and burst into tears–for my book, and for the kids I felt I’d failed. As a straight, adult woman, a mom and a professional, I’d allowed myself to be bullied into silence. So how could I encourage twelve year olds to stand up for themselves, to insist on being recognized and valued, when I couldn’t do the same?

Even worse was when I heard the next day that one of the teachers had actually apologized to her class after my talk. ‘We know you’re upset,’ she’d told them. ‘But don’t worry–we told the author to stop talking about that book.’

The contradiction that Dee encountered, whereby at least two teachers paid lip service to “diversity” but objected to specific age-appropriate LGBTQ content, is sadly nothing new. Just this month as well, the Charlotte-Mecklenburg (NC) school district is mulling whether to add gender expression and sexual orientation to its multicultural education policy, but found the picture book Jacob’s New Dress to be too extreme for first graders.

In spite of the overall trauma of her school visit, however, Dee feels that she reached at least one student for whom Star-Crossed could make a real difference. Remembering a very soft-spoken and self-conscious girl who asked a question about LGBT poetry, the author reaffirmed that books like hers are vitally necessary:

This was the kid who needed STAR-CROSSED. Not only did she need to read a sweet, positive middle grade novel about a middle schooler who wonders about her own sexual orientation, and ends up being okay with not knowing all the answers–she also needed to have an adult in the room who called on her. Who made eye contact. Who heard her voice.

Moreover, that student would also be well served by honest and open discussions of books like Star-Crossed with her peers. Unfortunately, her teachers seem more concerned with avoiding “parental backlash” than with demonstrating to all students that they are valued and respected.