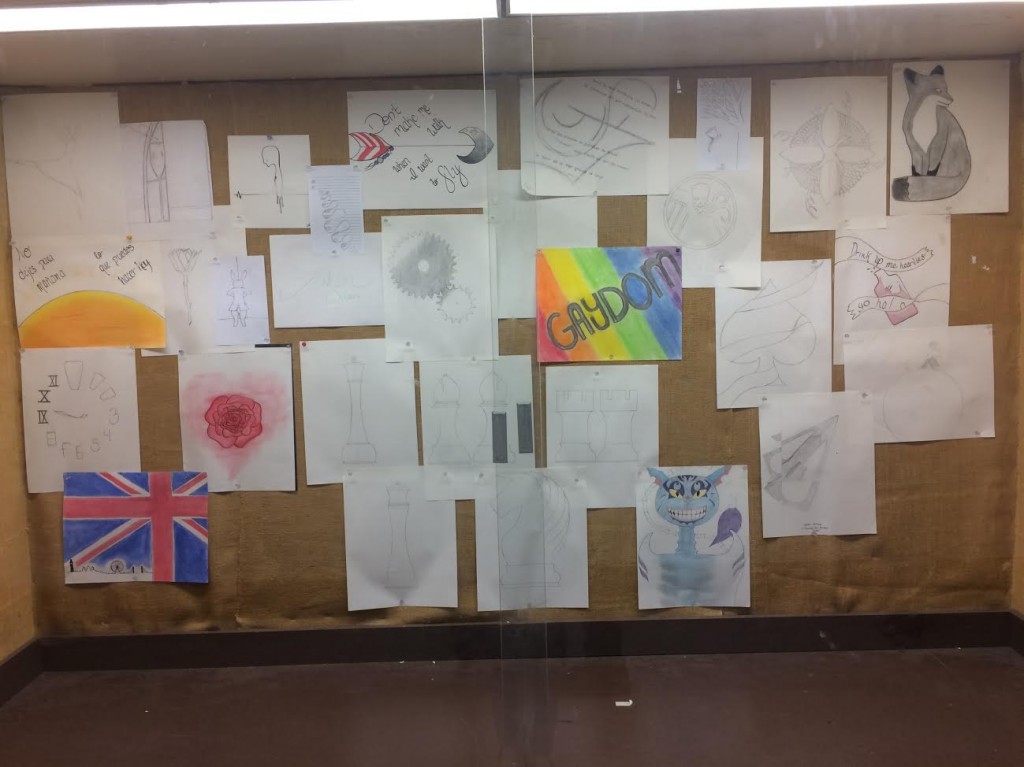 Student art on display prior to the removal.

Administrators at a Tennessee high school recently ordered the removal of a student’s LGBTQ-themed artwork from a classroom display case after other students complained about it. Principal Bobby Wines of Volunteer High School in Church Hill cited the complaints as proof that the rainbow-colored pastel drawing could not be allowed to remain because it “disrupted the learning environment.”

The drawing emblazoned with the word “GAYDOM” hung for two weeks in a display case with other art projects before Vice Principal Mike O’Neill told the artist to remove it. The student complied but promptly appealed to Wines, who denied her request to rehang it. The National Coalition Against Censorship and Lambda Legal last week sent a letter to Wines warning against acceding to a hecklers’ veto on student artwork, which not only violates the artist’s First Amendment rights but also invites other students or parents to seek the removal of any art with which they happen to disagree.

The letter made clear that “all students, including those who disagree with the artist, must be free to express their own views on LGBT issues,” but cited Hawkins County School District policy to show that the art did not actually appear to cause a substantial disruption in the classroom:

The artwork clearly does not violate the District’s Policy 6.306, which forbids the use of ‘violence, noise, coercion, threat, intimidation, fear, passive resistance, or any other conduct which causes the disruption, interference or obstruction of any school purpose.’ Nor is there a valid reason to believe a small rainbow motif that is one of many works in a display case can in and of itself create a ‘real or substantial threat of disorder.’ Students who find the artwork offensive or distasteful can simply choose not to look at it. The artwork is not vulgar, lewd, obscene, profane, or patently offensive. Rather, it conveys a purely political message in an aesthetically pleasing manner.

The letter asking VHS administrators to rehang the artwork and apologize to the student was sent last Wednesday, but NCAC and Lambda Legal have not yet received a response.