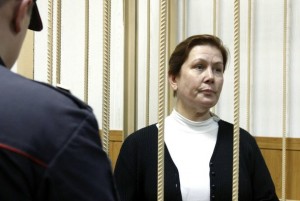 Natalya Sharina, the former director of Moscow’s Library of Ukrainian Literature who has been under house arrest since her home and library were raided by police in October 2015, has been convicted of “inciting hatred against Russians” and given a suspended sentence of four years.

Russian law prohibits the “‘mass dissemination’ of materials that the government designates ‘extremist’” and the country maintains a list of some 3,000 prohibited books that fall under this designation. Russian authorities raided the library and Sharina’s personal residence in October 2015. Copies of banned books by Ukrainian nationalist Dmitry Korchinsky were allegedly found in the library, but Sharina and library employees maintain that the books were planted.

Sharina went to trial late last year. She was charged with “inciting ethnic hatred and humiliating human dignity,” as well as embezzling about $54,000 from the library. Sharina also maintains her innocence on the latter charge, which stems from allegations that Sharina used library funds for a legal defense against extremism charges brought against her in 2013 (those charges were dismissed).

Although the suspended sentence means that Sharina will now be released from house arrest, she still plans to appeal the convictions on both counts to clear her name. After the verdict was announced this week, she proclaimed her innocence to reporters:

The state prosecutor admitted herself during the proceedings that this was a political case. Not one single book featuring on the current list of extremist literature today was present. People will probably recall this in a couple of decades…in the same way as we remember 1937 [the height of the Stalin-era show trials].

This highly politicized case runs totally counter to justice, and highlights serious flaws in the independence of Russia’s judiciary. Natalya Sharina should not have been prosecuted, still less convicted. The prosecution has exploited the highly charged anti-Ukrainian atmosphere that is prevalent in Russia at the moment, while the court simply dismissed key evidence for the defence, including testimonies that police officers were seen planting the banned books at the library.

Meanwhile, the city of Moscow appears to bequietly shutting down the Library of Ukrainian Literature. The space is open, but it is void of books, which are supposedly being merged into another collection elsewhere in the city.