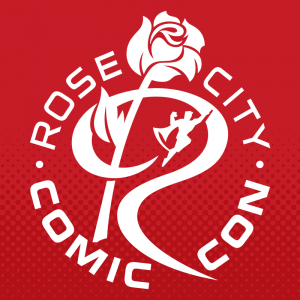 Be a comics defender this weekend at Rose City Comic Con in CBLDF’s hometown of Portland, Oregon! We’ll be on hand at booth #739 with signed goodies and more to support CBLDF’s important First Amendment work!

Get the latest censorship news with CBLDF panels, an exclusive (and very limited) variant zine from Shannon Wheeler, and the best signed premiums in comics September 8-10 at the Portland Convention Center. We’ll be defending the freedom to read all weekend at booth #739! 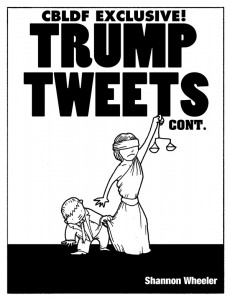 Join Shannon Wheeler, New Yorker cartoonist and the mastermind behind Sh*t My President Says: The Illustrated Tweets of Donald J. Trump, at 1:00 p.m. on Saturday, September 9, at CBLDF booth #739! Wheeler will have an extremely limited number of CBLDF-exclusive variants of his Trump Tweets zine!

From the medium’s earliest days, activists have taken to the comics form to communicate their messages to the world. CBLDF Deputy Director Alex Cox brings you on an image-filled march through more than a century of comics activism, revealing the history of how comics can change the world!

Get ready for Banned Books Week with Comic Book Legal Defense Fund! Come learn about the comics that are banned and challenged, and how you can stand up for the community’s right to read by celebrating Banned Books Week this September 24 – 30. Join a discussion moderated by CBLDF Executive Director Charles Brownstein.

Get a global look at comics censorship from CBLDF! See how the new political climate is affecting free speech in the U.S., with increased scrutiny at the border and an abundance of local challenges to comics addressing diversity and equality. Explore how cartoonists are being prosecuted, threatened, and intimidated by authorities around the globe for making art. Learn how you can participate with CBLDF in making a difference and standing up for free expression! CBLDF Executive Director Charles Brownstein leads the conversation.

See you this weekend at Rose City Comic Con!