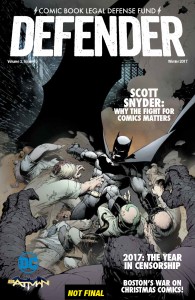 CBLDF Defender comes to you from the frontlines of censorship! In the last issue of 2017, CBLDF shares wise words on free speech from comics maestro Scott Snyder (Batman: Metal, A.D.: After Death)! Retailers, FOC is Monday, November 6 (SEP171440), so now’s the time to stock up!

CBLDF Defender Vol. 2 #4 features an iconic cover of Batman by frequent Snyder collaborator Greg Capullo (Batman, Spawn). In the issue, we look back on our work in 2017 protecting the freedom to read comics and on Boston’s war on Christmas comics!

Each issue of CBLDF Defender brings engaging creator interviews, detailed analysis of current censorship news, and in-depth features that tell the story of the people fighting for the freedom to read! CBLDF Defender is made available free to individuals at comic book stores and other venues across the country, who can order the publication in bundles of 50 for $10.50 each from Diamond Previews (SEP171440). Interested parties may also subscribe directly by mail here. CBLDF Defender Vol. 2 #4 is set to be in stores November 29, 2017!

Retailers, stock up now with Diamond order code SEP171440! If you’e a fan, ask your shop to carry CBLDF Defender!