CBLDF’s legal efforts in 2017 protected our community, overturned unconstitu-tional laws, and preserved the right to free expression. Some highlights:

The Fund helped facilitate the replacement of California’s flawed autograph law, protecting the rights of comics retailers, artists, and bookstores.

CBLDF joined a Media Coalition amicus brief in Tobinick v. Novella, and the court upheld our assertion that speech hosted on a website that also displays ads does not automatically become “commercial speech,” a category of speech that has less protection. This is a valuable victory for creators who publish comics online!

CBLDF continued battling the so-called “Beloved bill” in Virginia, which would have required schools to warn parents about materials containing “sexually explicit” content. The latest bill was vetoed by the governor.

CBLDF is defending vast swathes of library and classroom materials in Dixie County, Florida, where an order from the superintendent targets for removal any library materials, textbooks, or supplemental texts that contain “profanity, cursing, or inappropriate subject matter.”

We joined the National Coalition Against Censorship to protest H.B. 103, an overly broad New Hampshire law that was intended to regulate sex education but was so vaguely worded that it could impact books in other courses, including comics. 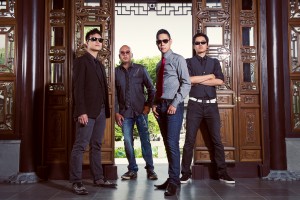 We joined a Cato Institute-led amicus brief in Lee v. Tam, a case in which the Supreme Court unani-mously struck down portions of the Lanham Act and upheld an activist Asian-American band’s right to an “offensive” trademark.

CBLDF joined dozens of organizations to oppose President Donald J. Trump’s immigration ban on individuals from predominantly Muslim countries. Such a ban would impact creative freedom, collaboration, and the free flow of ideas.

CBLDF joined a massive coalition to condemn a Department of Homeland Security proposal that would require non-citizens to provide their social media passwords as a condition of entering the United States. The policy would invade the privacy of foreign nationals and everyone in their social networks, including millions of U.S. citizens. The proposal also could impact U.S. citizens as other nations emulate DHS’s practices. The overly broad policy puts comics creators and convention-goers participating in events domestically and abroad at risk.