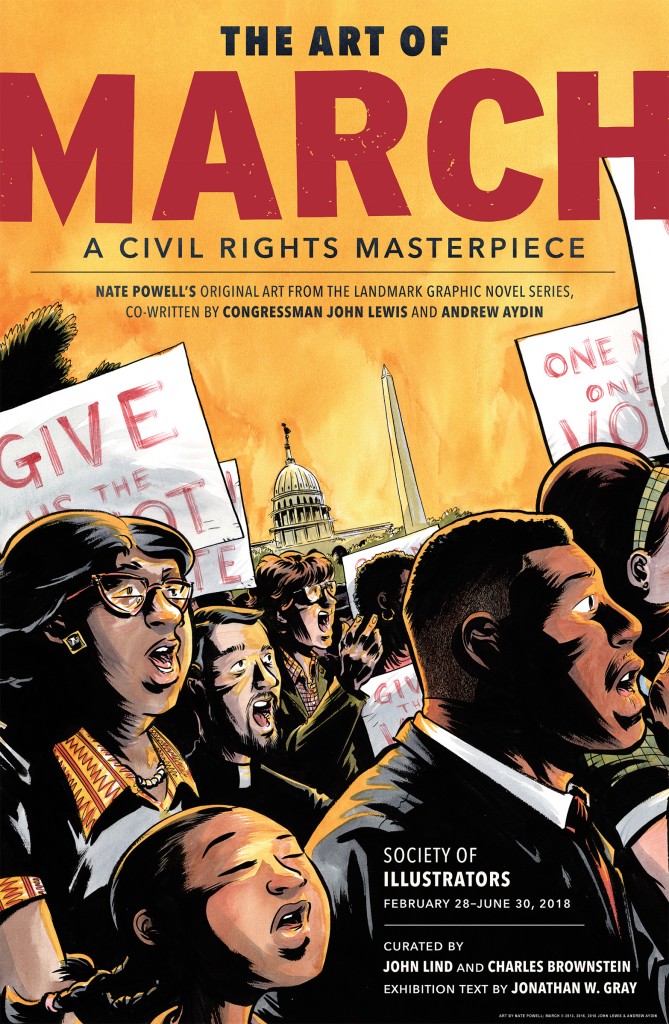 CBLDF Executive Director Charles Brownstein has teamed up with John Lind (Creative Director, Kitchen Sink Books, an imprint of Dark Horse Comics) to co-curate The Art of MARCH: A Civil Rights Masterpiece, an exhibit on display at the Museum of Illustration at the Society of Illustrators, February 28 – June 30, 2018.

The Art of MARCH: A Civil Rights Masterpiece walks visitors through the story of Congressman John Lewis’s experience in the civil rights movement as depicted by the pen of MARCH trilogy illustrator Nate Powell. This landmark exhibition of Congressman Lewis’s celebrated graphic novel memoir, co-written with Andrew Aydin, takes visitors on a visceral tour of the movement, illuminating pivotal moments, people, and philosophies through the display of over 150 pieces of original art, interactive materials, and new exhibition essays by Dr. Jonathan W. Gray, Associate Professor of English at John Jay College of Criminal Justice and author of Civil Rights in the White Literary Imagination: Innocence by Association (The University Press of Mississippi. 2013). Visitors will glimpse how this comics masterpiece was created, with behind-the-scenes process art and artifacts from the creative process. A portion of the exhibition also shows how Eisner Award-winning Powell matured from an SVA student steeped in the punk zine culture to become the illustrator of the most important political graphic novel of all time.

The Society of Illustrators will be organizing events open to the public in conjunction with the exhibit. An opening reception will take place on Thursday, March 1st, beginning at 6:30PM. A schedule of lectures, panels, tours and workshops geared towards students, teachers, as well as the general public will be announced in the coming weeks. More information on the exhibit and related events can be found at www.societyillustrators.org/exhibits/march.

In addition, Nate Powell and Andrew Aydin will be Guests of Honor at MoCCA Arts Festival. This 2-day multimedia event, Manhattan’s largest independent comics, cartoon and animation festival, draws over 8,000 attendees each year. Held on April 7 and 8th, the Fest will include speaking engagements, book signings, and parties. Further scheduling information for MoCCA Arts Festival will be available in future announcements.

The MARCH trilogy has been recognized for its groundbreaking storytelling with numerous accolades. MARCH: Book One became the first graphic novel to win a Robert F. Kennedy Book Award, MARCH: Book Two won the Eisner Award, MARCH: Book Three is the first graphic novel to receive a National Book Award, and the trilogy has spent a combined 99 weeks on the New York Times Bestseller List. MARCH is published by Top Shelf Productions, an imprint of IDW Publishing.

Founded in 1901, the Society of Illustrators and its Museum of Illustration together comprise America’s longest-standing nonprofit organization dedicated to the art of illustration. The mission of SI/MI is to promote the art and appreciation of illustration and its history and evolving nature through exhibitions and educational programs.

If you haven’t read March yet, you can pick up a copy of the slipcased trilogy, signed by Nate Powell and Andrew Aydin, in the CBLDF Rewards Zone.