Last weekend, CBLDF was thrilled to be in New York City, hanging out with awesome comic book creators, retailers, publishers, and especially readers at the MoCCA Fest. Some of the top names in comics stopped by to support free speech and sign their work for fans at the convention. 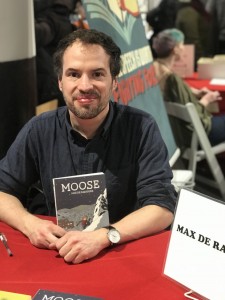 Max de Radiguès, a cartoonist and an editor at L’employé du moi, dropped by to sign copies of Moose and Weegee. He took the time with each fan to sketch something special in each work. 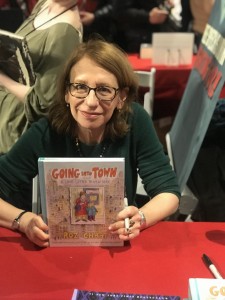 Roz Chast, the award-winning cartoonist most famous for her work in The New Yorker stopped by to hang out with fans and sign copies of her memoir Can’t We Talk About Something More Pleasant? and her love letter to New York, Going into Town. 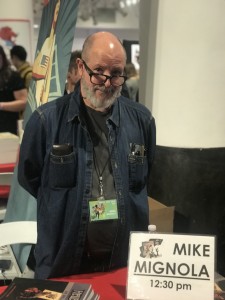 Hellboy creator, Mike Mignola, found time to drop by and talk with fans about their favorite pieces while signing gorgeous Artist Editions CBLDF had on hand. One fan Jason brought by a page from one of Mike’s earliest Works, Dracula. 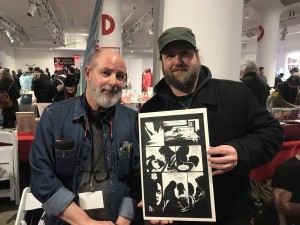 It was a rare treat to see such an early piece that was not only beautiful but also indicative of the work Mike was going to go on to create in the twenty-five years since its creation. 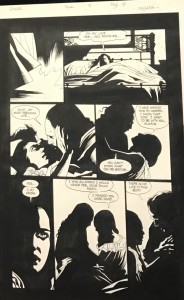 For those who have never seen Mike’s Dracula, it is a comic book adaptation of the 1992 movie with Gary Oldman, Keanu Reeves, and Winona Ryder. IDW is rereleasing the book, which Mike Mignola brought to life with Roy Thomas, and a new hardcover edition is available for preorder now. 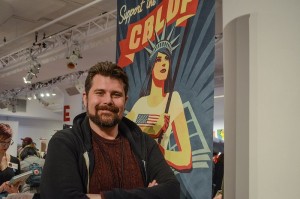 When he wasn’t moderating a panel on Congressman John Lewis’s MARCH with Nate Powell and Andrew Aydin, CBLDF Executive Director Charles Brownstein was also on hand at the booth. The panel discussed the creation of MARCH, as well as the timeliness of the topics within, and the new exhibit at Society of Illustrators examining the original art and artifacts from its creation. The exhibit runs through June, so if you’re in the New York City area, check it out.

← Wear Your Support for CBLDF with T-Shirts, Enamel Pins, & More!
CBLDF at the Library of Congress →