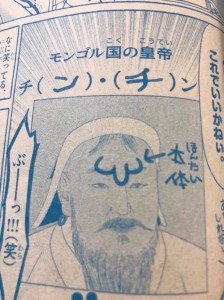 Back in February, Japanese manga magazine, Coro Coro wildly offended Mongolians with a portrait of Genghis Kahn with male genitalia scrawled on his forehead, and some wordplay above it, which translates to “penis.” As funny as it may sound some, the censorship that followed is was anything but.

If the art sounds random, that’s because it was. It was part of the magazine’s doodle drawing contest. Other doodles depicted Einstein as a Shih-Tzu, Napoleon as part of a popular trading card game, and Yoshimitsu Ashikaga (a fourteenth-century shogun) was drawn as a very creepy Kewpie doll. To some people, the most offensive thing about the Kahn image might have been the lack of effort. But to Mongolians, Genghis Kahn is a revered national hero, and the offensive drawing showed not only disrespect for the historical legend, but also for all of Mongolian culture. So the Mongolian Embassy in Japan posted to their Facebook page about it.

“Coro Coro did not just have a crude image on the monthly journals. [This is] not just about the history of Mongolia, but also on the sincerity of the Japanese government [for] people in Mongolia.

It is a violation of the Japanese legislation aimed at protecting the rights of children, not only violating the moral standards but also prohibiting pornography.
Therefore, I have deep regret for this immoral act and I am opposed to the Ministry of Foreign Affairs of Japan, and I hope the Japanese side will focus on the issue with the law.”

Mongolia also lodged a formal complaint with the Ministry of Foreign Affairs in Japan (MOFA), who then contacted the publisher, Shogakukan. Shogakukan apologized in person to the temporary Mongolian ambassador who had posted the Facebook admonishment and then issued a formal apology to all Mongolians and Coro Coro readers who were offended by the drawing. That wasn’t enough though, and protests began until Shogakukan eventually pulled the issue entirely off the shelves.

So what’s the problem? A company can surely self-censor an issue if they choose to. And there’s nothing wrong with apologizing when an individual or a group feels degraded. But there are red flags that are easy to skim over when dealing with a news item that offers up such easy punchlines.

First, there’s the assertion that Shogakukan had broken the law, that sort of unsubstantiated claim can cause a lot of trouble. And what law? Obviously showing children pornography is illegal, but can a doodle be considered pornography in Japan? What about free speech? Let’s look closer because there are a lot of elements to this claim.

Article 21 of Japan’s constitution guarantees them “freedom of assembly and association as well as speech, press and all other forms of expression.” But obviously, free expression doesn’t extend completely to minors, to protect them – theoretically – from images they aren’t mature enough to handle. Those laws are handled by local ordinances, like Tokyo’s Bill 156, or as it is formally known, Tokyo Metropolitan Ordinance Regarding the Healthy Development of Youths.

Many American anime and manga fans may have come across Bill 156 before in their reading. It was widely contested in 2010 by creators and fans in the industry because the ordinance was expanded to include the following language “any manga, animation, or pictures (but not including real life pictures or footage) that features either sexual or pseudo sexual acts that would be illegal in real life, or sexual or pseudo sexual acts between close relatives whose marriage would be illegal, where such depictions and/or presentations unjustifiably glorify or exaggerate the activity.”

Before the expansion, it already contained language preventing the lease or sale of “harmful publications” to minors that could be considered “sexually stimulating, encourage cruelty, and/or may compel suicide or criminal behavior.”

Now let’s jump back to Coro Coro. While the doodle may be considered to be in bad taste, does it meet any of the above criteria? It doesn’t stimulate, glorify or exaggerate, or inspire and deviant sexual behavior or thoughts.

So if the publisher, Shogakukan, didn’t break the law – why didn’t they defend themselves? It’s easy to picture a similar situation here escalating to a courtroom. But instead, they apologized and then censored their own product. Possibly because the complaint came to them from the Ministry of Foreign Affairs.

The Ministry of Foreign Affairs is a cabinet-level organization in Japan, the head of which is widely considered to be one of the most important roles in the government. It is difficult to imagine that framing the complaint through the government, did not lend credence to the false claim that a law had been broken, as well as create a feeling within the publishing house that there would be zero support if they chose to stand behind their work under Article 21, asserting their right to free speech.

Certainly, some are thinking that a childish drawing of a penis is not the hill to die on when it comes to censorship. But intimidation into self-censorship is insidious means of condemning work. It makes it hard to quantify the real damage because there’s no telling the extent to which public intimidation has a chilling effect on other publishers and creators, stopping their work before they even begin in.

CBLDF’s important work in the manga community by becoming a new member. Right now there are special manga specific rewards like amazing signed graphic novels, original artwork, and so much more to choose from! Your contributions keep us fighting on the front lines of free expression – so join today!

Don’t miss out on the Kodansha manga to anime humble bundle supporting CBLDF! $800+ worth of groundbreaking manga, for as little as $1. Hurry! Ends June 20!