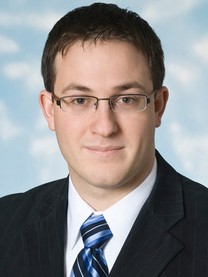 Joshua Simmons has been highlighted by Law360.com as one of the “Rising Stars” to watch in the legal field! Simmons, who has provided advice to CBLDF on a number of IP cases, is a partner at the prestigious law firm, Kirkland & Ellis, in New York City, along with Secretary of the CBLDF Board, Dale Cendali.

Simmons fell in love with entertainment and the arts young – acting and doing theater tech up through his first year of college. And though a life on stage wasn’t his destiny, he has found a way to combine his love of media with his exceptional talent for law and grasp of intellectual property, winning several high profile cases, including one at the Second Circuit of Appeals. Simmon’s told Law360.com, “I get to see so many people that are so talented … I really think I found the right place for me.”

The excitement started quickly for Simmons, his first week at Kirkland & Ellis he landed a case defending the creators of Modern Family from a lawsuit claiming “that it ripped off a writer’s idea for a pilot television series called Loony Ben.” Simmons represented the show’s creators, Steven Levitan and Christopher Lloyd, along with ABC Inc. and the other corporations affected by the suit.

“A federal judge in New York’s Southern District tossed the case, brought by writer Martin Alexander before he appealed
to the Second Circuit. There, a case that Simmons had worked on during his first week as a Kirkland associate became another victory for the firm: a panel ruled that the similarities between Modern Family and Loony Ben were ‘sparse and minor,’ according to the court’s opinion.

That wouldn’t be Simmons only experience with the Second Circuit. Simmons represented Fox News in a crucial case of copywriter infringement against “a broadcast media search engine that pulls clips from television and radio and then indexes them into a word-searchable database” called TVEyes. TVEyes argued that its service was comparable to Google Books, a vast searchable index of books made available without the publishers’ permission, but has been deemed fair use by the Second Circuit. Initially, a federal judge sided with TVEyes, but Simmons and Fox News didn’t stop there. Upon appeal,

“Simmons and the Kirkland team persuaded the circuit court to find that TVEyes had gone a step further, depriving Fox News of revenue it deserved. “It’s really an important case,” said Simmons, “because so much of television — and media in general — is going digital and trying to capture short-form content.”

And this is only a portion of the exciting work Joshua Simmons has done and continues to do at the forefront of intellectual property law. Register for free to read the full article (and find more rising stars in the legal world) at Law360.com or check it out at the Kirkland & Ellis site. Comic Book Legal Defense Fund, would like to congratulate Joshua Simmons on the recognition of his hard work and dedication to his clients and his craft. We are proud to count him as one of our many talented and tireless supporters and certainly agree with Law360.com’s assessment that his star is on the rise.