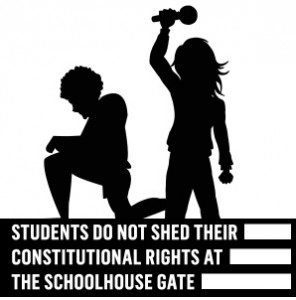 A sixth-grade student was arrested in Florida after refusing to participate in the pledge of allegiance. The substitute teacher attempted to insist on his participation but the student still abstained, explaining his views that the flag represents racism in America. The substitute told him if he didn’t like it, maybe he should find somewhere else to live. According to Vox “The teacher said she then called the office because she ‘did not want to continue dealing with him.” A school resource officer eventually arrested the student for “disrupting a school function” and “resisting arrest without violence.” He was taken to a juvenile detention facility and placed on a three day suspension. Comic Book Legal Defense Fund in conjunction with a group of other free speech organizations has released a letter expressing their dismay at the excessive punishment.

The school district released a statement stating that the teacher hadn’t realized that students weren’t forced to say the pledge, but as a local news story points out, it has been considered unconstitutional since 1943. The Supreme court case West Virginia State Board of Education v. Barnette was brought about by a group of Jehovah’s Witnesses suing the West Virginia Board of Education, because forced participation in the pledge violated their religious practice, another aspect of the First Amendment. Justice Robert Jackson wrote in the majority opinion,

“If there is any fixed star in our constitutional constellation, it is that no official, high or petty, can prescribe what shall be orthodox in politics, nationalism, religion, or other matters of opinion, or force citizens to confess by word or act their faith therein. If there are any circumstances which permit an exception, they do not now occur to us.”

Vox points out, that schools with “resource officers” are far more likely to handle class disruptions with arrests. The loss in school time and the negative marks to a students records often lead to more run-ins with the criminal justice system later on, essentially cementing the “school-to-prison pipeline” that many criminal justice reform advocates say is leading to just some of the many discriminatory problems in a broken system.

In the open letter from CBLDF, National Coalition Against Censorship, and other free speech advocates, it states:

“Dissent and disagreement are neither violent nor inherently “disruptive.” We remind all school boards, administrators and educators that protest, political dissent and freedom of expression are protected rights for all students.”

As we celebrate the 50th Anniversary of Tinker vs. Des Moines it is crucial that we keep the spirit of the First Amendment intact for all ages, because as Justice Fortas wrote in his majority opinion for that landmark case,

The Fourteenth Amendment, as now applied to the States, protects the citizen against the State itself and all of its creatures – Boards of Education not excepted. These have, of course, important, delicate, and highly discretionary functions, but none that they may not perform within the limits of the Bill of Rights. That they are educating the young for citizenship is reason for scrupulous protection of Constitutional freedoms of the individual, if we are not to strangle the free mind at its source and teach youth to discount important principles of our government as mere platitudes.

The letter admonishing the decision to arrest the sixth grader in Florida points to the “well documented” impact that juvenile detention can have on students. It links to 11 Million Days Lost: Race, Discipline, and Safety at U.S. schools a collaborative report from the ACLU of Southern California and The Center for Civil Rights Remedies by UCLA’s Civil Rights Project. The report “highlights new data showing the days of lost instruction” resulting from the use of suspension…[and] is the first of two data snapshots of the school-to-prison pipeline in America. It starts with inequitable access to instruction due to disparities in discipline.” In other words, arresting an eleven-year old, sending him to a juvenile detention facility, and suspending him for three days is not just a gross violation of his First Amendment rights, it’s also indicative of a much larger epidemic in schools all across the country.

Please read the full text of the open letter below.

A coalition* of free expression advocates are alarmed to learn that an 11-year old student was arrested after exercising his lawful protest in Polk County, Florida. As we mark the 50th anniversary of Tinker v. Des Moines, our most celebrated and cited case protecting the core right to speech in school, we are disturbed by the total disregard for this student’s rights demonstrated by his teacher and school officials, ultimately resulting in extraordinarily harsh and discriminatory punishment.

Dissent and disagreement are neither violent nor inherently “disruptive.” We remind all school boards, administrators and educators that protest, political dissent and freedom of expression are protected rights for all students.

A free and fair society requires tolerance for diverse views and the freedom to express them. The Supreme Court affirmed in West Virginia v. Barnette (1943), and again two decades later in Tinker v. Des Moines (1969), that young people of all ages are entitled to express their political views in schools. The Court made clear that “educating the young for citizenship is reason for scrupulous protection of (their) Constitutional freedoms,” including the freedom to choose not to stand for the Pledge of Allegiance.

While schools should encourage students to practice articulating the reasoning behind their opinions, it is blatantly unconstitutional for teachers to suppress students’ views simply because they disagree, or to punish students for expressing those views. Recent unconstitutional punishment of student dissent includes suspensions and expulsions for kneeling during the National Anthem and participating in last year’s National Student Walkout to protest gun violence. That this latest incident resulted in a child’s arrest demonstrates the dire consequences of disregarding students’ rights. The lifelong impact of institutional discipline, particularly juvenile detention, on children is well-documented.

We encourage schools to share resources like NCAC and CBLDF’s short comic on student protest rights, NCAC’s in-depth look at First Amendment rights in schools and the ACLU’s rights guide with all teachers and staff to ensure that they understand their responsibilities to respect their students’ rights and to help them become active and informed citizens.

A resource for student journalists covering controversies in their schools is available from the Student Press Law Center.

National Council of Teachers of English

Center for the Study of Institutions & Innovation, University of Wisconsin-Stout