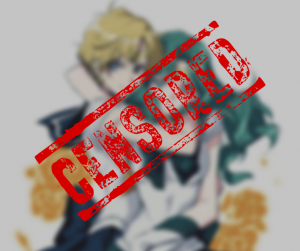 If you happened to watch the American dub of the anime Yu-Gi-Oh! back in the early 2000s, you might have noticed a few things were off. Characters would go out of their way to dramatically point at one another. They drank “grape juice” out of fancy glasses. Some characters were really into lollipops that definitely weren’t cigarettes. Or maybe you didn’t notice that because you were a kid, just enjoying your Saturday morning cartoon.

Yu-Gi-Oh! was imported by 4kidz media, who took it upon themselves to hack away anything that could be controversial about the show, to the point where they replaced any threat of death or violence with “being sent to the Shadow Realm.” This wasn’t the first or the last dramatic censorship of anime as it rose to popularity in the US, and 4kidz wasn’t the only company censoring content.

Queer characters and subtext were regularly cut from shows like Sailor Moon and Cardcaptor Sakura. In Sailor Moon, characters like Fish Eye and Zoicyte were re-gendered to avoid any queer association. In a particularly strange example, two love interests in the original show, Sailor Neptune and Sailor Uranus, became cousins in the American dub to obscure their lesbian relationship. In the Japanese Cardcaptor Sakura, Tomoyo has a blatant girl-crush on Sakura. In the American Cardcaptors, Tomoyo became Madison (more Americanized name) who is just a sassy sidekick to Sakura. Cardcaptors also removed the gay relationship between Toya and Yukito, making them close friends in the dub. Even later in the anime boom, an early episode of Naruto is supposed to have an accidental kiss between the series’ two rivals: Naruto and Sasuke. In the American dub, the shot was completely removed and instead cuts to the reaction of the rest of the room.

Naruto and Dragon Ball Z both faced pretty vicious re-drawing to remove any blood that was deemed not child-friendly. Sometimes large amounts of blood would be removed in scenes that had a lot of gore, and sometimes it would be the removal of a little bit of blood. Early episodes of Dragon Ball Z faced so much censorship it would be pointless to list. From removing words like “death” completely from the translation to editing out cigarettes, the companies bringing in Dragon Ball Z applied censorship with a heavy hand to make it as parent-approved as possible.

Cuts to manga seemed to less overt but were still present as manga and anime boomed through the 2000s. Often, the censorship was applied to religious imagery, nudity, and symbols that become racist in a Western context (or just any context). Characters in both Fullmetal Alchemist and Naruto died on crosses in their original texts, but when imported, the shapes were changed to avoid the Christian imagery. Viz Media was honest with their fans from early on in the 2000s that they were censoring nudity and some of the more adult jokes from the Dragon Ball manga in an attempt to avoid controversy. While Viz Media has reprinted and released new editions of Dragon Ball and removed aspects of the original censorship, it does not seem like they have released a fully uncensored version.

Due to the need for translation with manga, it is easy for publishers to edit or entirely remove elements of the story without their wider audience noticing. Censorship discrepancies are often only noticed when scanslations (pages scanned directly from Japanese magazines and translated by fans) are compared to the official translated text. So while censorship within the industry may still happen, it can be difficult to catch without constant vigilance.