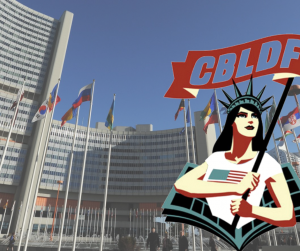 Recent draft guidelines circulated by a United Nations agency with the goal of expanding child protection also included provisions targeting expressive content, including comics, prose and other forms of artistic expression. Last week, CBLDF submitted comments on the draft that applaud the UN’s efforts to protect children, while cautioning against encouraging governments to place new restrictions on freedom of expression.  Read on for more background and the full text of CBLDF’s comments.

The DRAFT Guidelines on the implementation of the Optional Protocol to the Convention on the Rights of the Child on the sale of children, child prostitution and child pornography from the Office of the United Nations High Commissioner for Human Rights’ Committee for the Rights of the Child contains proposed amendments to two currently enacted treaties from the UN.

CBLDF strongly supports all efforts that encourage child protection. The organization is concerned about language that would affect expressive speech, including a large range of international comics. CBLDF’s comments focus on paragraphs 61 – 63 of the Draft Guidelines, which seek to alter the definition of child pornography  in a way that would label vast amounts of comics, art, anime, personal narratives, poetry, and more, as child pornography. Paragraph 61 details this expansion as follows:

Child pornography is defined in article 2 OPSC as “any representation of a child engaged in real or simulated explicit sexual activities, regardless of the means used, or any representation of the sexual parts of a child for primarily sexual purposes”. The qualification “by whatever means” reflects the broad range of material available in a variety of media, online and offline. It includes, inter alia: visual material such as photographs, movies, drawings and cartoons; audio representations; any digital media representation; live performances; written materials in print or online; and physical objects such as sculptures, toys, or ornaments.

In the draft’s next paragraph, The Committee encourages participating countries to expand their Criminal Codes to include  “representations of non-existing children.” Up to this point, it has generally been agreed on that the criminal aspects of these laws can’t apply to fictional characters, because child pornography laws are written to protect real children, not criminalize free expression.

Lastly, in paragraph 63, The Committee claims that the purpose of broadening the definition of child pornography in the two previous paragraphs to apply to everything from comics to theater, and include both fictional and nonfictional characters, is that “such depictions contribute to normalising the sexualisation of children and fuels demand of child sexual abuse material.” Which is an unfounded claim that has no supporting data in the draft guidelines.

Could These Guidelines Affect the United States?

The draft guidelines conflict with established precedent in the US that protects free expression. CBLDF’s official comments detail the specific contradictions to U.S. law presented by broadening the interpretation to include “non-existing children.”

This assertion is contrary to the United States Supreme Court’s determination in New York v. Ferber that the government’s rationale for child pornography regulation is the protection of actual children, specifically by purging the record of their abuse and eradicating the market for records of such abuse. In Ashcroft v. Free Speech Coalition, the same court ruled that definitions of child pornography do not extend to expressive images such as drawings and cartoons. Government’s compelling interest is in protecting actual minors from abuse, not in criminalizing expressive content.

The U.S. Constitution and case law sets a high bar to protect freedom of expression. However, recent legal issues, such as Florida’s HB 855/SB1454, do attempt to reduce constitutional protections, including by changing the definition of child pornography to include written or drawn depictions of minors engaged in sexual behavior, including scenes in classic and mainstream works of Young Adult literature. So, while it’s unlikely these guidelines could take hold in the US, there is cause to remain vigilant to protect valuable forms of protected speech.

Is This Speech Really Worth Protecting?

In addition to extending the guidelines to include fictional characters, the language on what would be considered “child pornography” is far too broad, leaving the possibility open that memoirs from abuse survivors in any form, from podcasts to art installations, and most definitely including comics-form memoirs and creative nonfiction accounts, could be in violation of these proposed guidelines if they describe or depict details of abuse.

With regard to the draft’s unsubstantiated claim that “such depictions contribute to normalising the sexualisation of children and fuels demand of child sexual abuse material,” CBLDF notes, “There is a lack of evidence to support the assertion.” CBLDF’s comments detail how media effects arguments of this type have been used in attempts to censor expressive content, like comic books in the 1950s, and more recently, with violent video games. “It is both dangerous and imprecise to suggest that the existence of media addressing a troubling aspect of real-life promotes and normalizes those negative real-life behaviors,” CBLDF’s comments state.

CBLDF also raises concerns that “broad prohibition of expressive content will serve to divert law enforcement resources from protecting actual victims, and towards punishing thought crimes.”  CBLDF’s comments detail the cases of R. v. Matheson  and U.S. v. Handley, where comic book readers were prosecuted under Canadian and U.S. child pornography statutes for mere possession of comics. In the case of Matheson, charges were eventually dropped, but not before his life was significantly disrupted. Christopher Handley chose to accept a plea agreement and was sent to prison, despite the government’s acknowledgment that his conduct did not produce any victims. CBLDF’s comments note, “These prosecutions did not result in protecting actual minors, they instead punished individuals who pose no threat to their communities for the possession of expressive content.”

CBLDF acknowledges that governments have a compelling interest in curbing child abuse. CBLDF’s comments to the UN state, “It is laudable that [The United Nations] and governments around the world are taking action to curb child sexual abuse. In all cases, our efforts must be directed towards protecting real children, and not on restricting free expression.” The full text of CBLDF’s comments is presented below:

Comments on Draft Guidelines by Patricia Mastricolo on Scribd