The 2019 World Press Freedom Index has been released and continues the narrative of previous years as animosity towards the press erodes into hostility and violence, fostering an environment of fear for journalists around the globe. The United States has fallen three more places in the ranking, landing, not at good or even satisfactory, but in the fittingly orange slice labeled “problematic situation.” 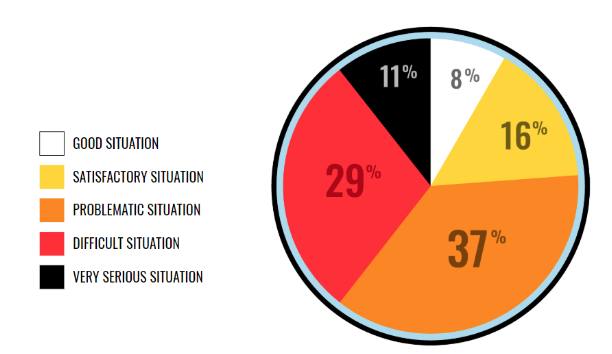 According to the World Press Freedom Index Analysis,

Never before have US journalists been subjected to so many death threats or turned so often to private security firms for protection. Hatred of the media is now such that a man walked into the Capital Gazette newsroom in Annapolis, Maryland, in June 2018 and opened fire, killing four journalists and one other member of the newspaper’s staff. The gunman had repeatedly expressed his hatred for the paper on social networks before ultimately acting on his words.

The World Press Freedom Index is an annual list compiled by Reporters Without Borders, a nonprofit dedicated to protecting journalists, and free expression, around the world. The Index is based on survey responses from members of the media around the world, as well as lawyers and sociologists, which are added to a running database of known cases of violence and intimidation against journalists. The annual report has been repeatedly warning people around the world about the deterioration in press safety in recent years.

With the U.S.’s fall to 48 out of 180, it is the first time since the report’s origin almost two decades ago, that the country isn’t listed in the good or neutral sections of the list. Editorial Cartoonists are among those journalists facing threats, intimidation, jail, and worse. Though often overlooked when discussing free press and harassment of journalists, editorial cartoonists speak truth to power, one panel at a time.

For those interested in tracking the instances that lead to changes in the report each year, or have a situation to submit, check out the U.S. Press Freedom Tracker. As of the time of writing this article it shows that in 2019 5 journalists have been arrested, 10 journalists have been attacked, 6 journalists stopped at the border and 4 prior restraints cases.

In December, Time magazine named The Guardians of Truth as the Person of the Year, a coveted cover to honor something or someone that has had a great impact the year. In this particular case, it seems Time was hoping to draw the public’s attention to something that many don’t want to look at, the disintegration of press freedom at home and abroad. The four covers highlighted imprisoned (Pulitzer-Prize winning) Reuters journalists Wa Lone and Kyaw Soe Oo, butchered journalist Jamal Khashoggi, falsely imprisoned independent journalist Maria Ressa, and the staff of Annapolis, Maryland’s Capital Gazette. Sadly magazine covers aren’t going to fix this. The further the pendulum swings away from a free press that can operate without fear of violence, the longer and harder the path back to those First Amendment rights will be.