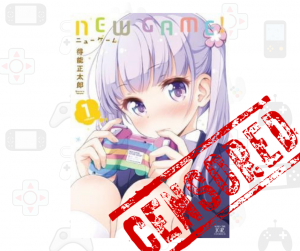 Popular anime show New Game is now being broadcast in South Korea, but not before the censors got their hands on it. And while anime censorship is not new or surprising, the ridiculousness of the situation with New Game has caused the censored images to go viral. What is surprising is that fans aren’t sharing it out of outrage, most are somewhere in between bafflement and laughter, because somehow the censored images from the show look far more inappropriate for work then the unaltered anime.

New Game! originally aired from 2016 – 2017 in Japan, and is based off the popular manga of the same name. New Game! is a Yonkoma manga, or 4 panel manga, similar in ways to an American comic strip in set-up and delivery. According to Megan Peters at ComicBook.com, stills from the show starting popping up on Twitter with some confused comments. Without any context they appear to be of a woman wearing a long sleeved black shirt and nothing else, since the censors blurred out almost everything below that. The background in the scenes looks like a web or game development office, maybe a computer lab in school, which only adds to the absurdity of this woman not wearing any pants and everyone in the show acting like it is totally normal. Of course it turns out that the South Korean censors were blurring the flashes of underwear that could be seen with the character’s short dress.

South Korea has a complicated relationship with censorship as well as Japanese media. Despite the country being known around the world as the modern, liberal, easy-going, Korea they still have some outdated laws and practices that harken back to previous governments. Until the 1990’s a show like New Game! would have been illegal to show, not because of a flash of underwear, but because all Japanese media was illegal in Korea until then. There are still several laws on the books prohibiting Japanese media, but nowhere near the restrictions of twenty years ago. Same with pornography, which is still technically illegal in South Korea, even though people say that the laws against it aren’t enforced at all.

Censorship is never a good thing, but it is okay to laugh at it when someone gets it spectacularly wrong. It is the perfect chance to point out that making something stand out often has the opposite affect that censors want. So instead of no one being corrupted by the sight of drawn underwear, millions of viewers are now spending time and energy considering what is being blurred out.