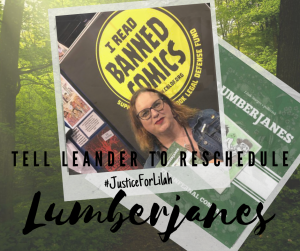 This Thursday – August 15, 2019 – the Leander, Texas City Council will meet to discuss the proposed changes to Public Library Programming Policy that led to the discriminatory cancellation of an event with renowned transgender comics author, Lilah Sturges. Comic Book Legal Defense Fund and the National Coalition Against Censorship urge the city council to immediately restore Lilah Surges’ planned Lumberjanes discussion with the Graphic Novel Book Club. We call on the council to reaffirm their commitment to free expression and inclusion by adopting library policies which will prohibit discriminatory actions from happening again in the future.

When Sturges’ event was canceled with only two hours notice, for reasons the city couldn’t quite explain, CBLDF & NCAC spoke up with our Kids’ Right to Read Project (KRRP) partners and demanded accountability from Leander city council for their discrimination of Sturges. The city blamed miscommunication with library management over temporary changes to library policy. The city also cited a new background check requirement that Sturges was never informed of until the cancellation and to which previous speakers had never been subjected. The temporary event policy was adopted by the Council in June in response to anti-LGBTQ protests against Pride events for youth.

Since that letter was sent, we have been joined by Leander’s own, Councilwoman Christine Sederquist. She called for accountability at the previous city council meeting, demanding to know who put these changes into effect without a vote. Met with silence, she took to Twitter to call for #JusticeForLilah.

Join CBLDF Thursday to demand Leander City Council immediately restore the planned Lumberjanes event, and to adopt inclusive library policies that will protect free expression for all. If you’re in the Leander/Austin area, you can attend the event – it’s open to the public.

Speak up for free expression and help us right this injustice! Let Leander City Council members know you want inclusive library events that represent the spirit of Leander, including an immediate rescheduling of the Lumberjanes talk with the Graphic Novel Club. Email (citycouncil@leandertx.gov) and tweet @CityofLeander to demand #JusticeForLilah and #UncensoredPride for all!

KRRP Letter to Leander by PM on Scribd