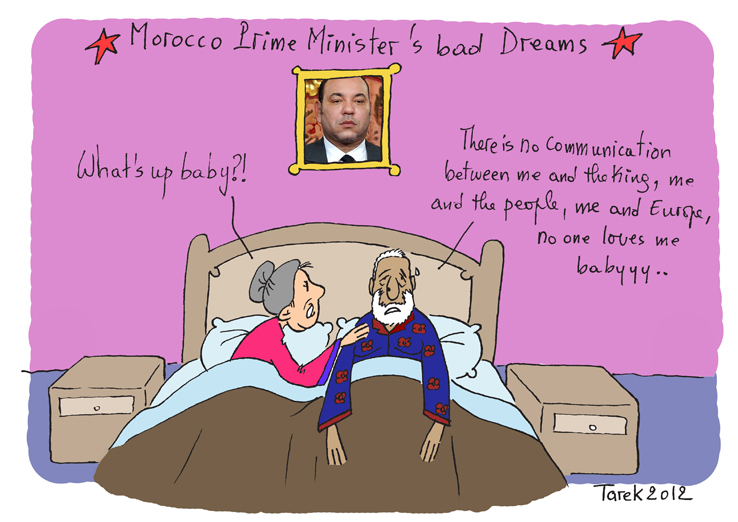 Despite describing his native Morocco as being “like a chained human being and there is a giant mosquito drinking its blood,” and believing that “political cartoons have no impact on Moroccan policies,” political cartoonist Tarek Benbaba is still motivated to keep drawing, to keep offering political commentary because “by making cartoons I feel I am a positive person representing the truth from my own perspective. When people are exposed to the truth from different perspectives they can form a global view and get closer to what is happening more than if there is only one perspective of looking at things.” Having recently joined the political cartoonist blog, Cartoon Movement, Benbaba describes the hard life of political cartoonists in Morocco as one of knowing where the “red lines” of censorship exist in his country.

This past February, a young man was sentenced to a year in jail for posting a political cartoon that depicted a caricature of the King of Morocco, and Benbaba notes that every cartoonist in the country knows where the “red lines” are and which subjects run the highest risk of government reprisal:

Censorship is very strong in Morocco and every single cartoonist knows the red lines. Cartoonists do not dare express their opinions freely concerning many political issues that have to do with the king or the Sahara for example. This affects a cartoonist work if they want to express their opinion freely. Many cartoonists refuse to work for newspapers and look for other platforms, mainly social networks or local/international electronic media. The majority, however, chooses to stay away from troubles and never work on thorny issues.

Benbaba is not alone in using social media to circumvent censorship. In August, the Justin Brown write an article for the CBLDF entitled, “Comic Spring in the Arab World,” which detailed the rise of political cartoonists in Arab countries. These artists “have been cultivating a new era of cultural, social, and political importance of the media. These artists have been defiant, often risking their lives in the face of harsh censorship as their nations transition to more democratic governments. This comic renaissance has prevailed since the beginning of the Arab Spring…”

Despite the difficulties, Benbaba believes in the power of political cartoons to affect the opinions of Morocco’s citizens, if not their government:

When people are exposed to the truth from different perspectives they can form a global view and get closer to what is happening more than if there is only one perspective of looking at things. […] When I am honest in my job and deliver honest messages, I am helping people to see things more clearly. Cartoons also help me develop a sense of being critical and not take anything for granted. I hope to keep on drawing the truth as I see it.

All of Tarek Benbaba’s political cartoons for Cartoon Movement can be found on his dedicated page.