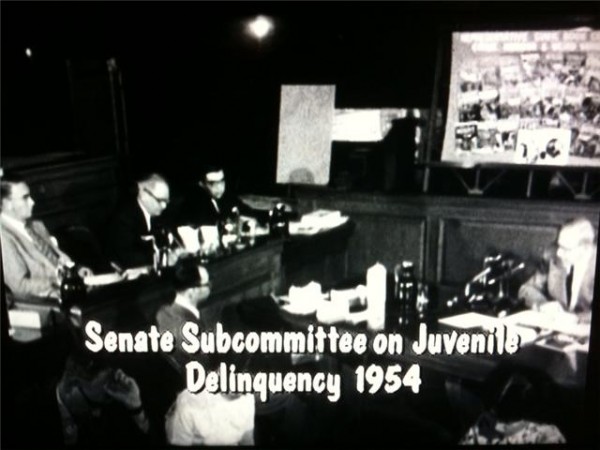 Happy National Comic Book Day! In honor of the occasion, the U.S. National Archives shared some wonderful items from their collection on their Facebook page. All became federal records in 1954, when they were presented to a Senate subcommittee which was investigating whether comics led to juvenile delinquency. In addition to copies of Mad (the very first issue!), Terrors of the Jungle, and Prize Comics Western, the USNA features two illuminating letters from citizens on the opposing sides of the debate.

If the mothers of our beloved country would unite to have these pernicious comic books banned I am sure it would be a great step forward in the control of the young, particularly the young boys.

I do not want to bore you with onerous detail but I have found that even though a mother is alert and does not allow her children to waste their money or time on these cheap and filthy comics, one’s children can read them at the book stands or read them when they visit their friends.

Genovar also argues that comics might be so exciting as to make anything else seem boring, and that this is a bad thing:

[R]eading all these lurid, highly colored comics ruins a child’s appetite for good books as the better literature sounds too tame after this other highly seasoned diet.

And she skeptically addresses those who would let children choose their own reading:

Of course you will have educators (?) and others who will rise up and say these comics do not harm the minds of the readers but I think the proof that they do is right in front of us, in increased juvenile delinquency….

Representing the other side, meanwhile, we have young comic fan Robert Merdian of Millvale, Pennsylvania, who wrote his own letter to the subcommittee (all errors in the original):

I have been reading comic books for seven to nine years….I have never robbered a bank or thinks like that. My personal opion is I think reading crime books makes a young or old person not want to commit a crime, because in every story the old saying ‘Crime don’t pay’ is carried out. The person or persons commiting the crime are always caught. The fear of this stops crime and stops juvenile delinquency in fact there is not a suffent number of the comic books on the book stands.

This young man asking for more of the reading material he enjoys certainly sounds like a dangerous criminal! Although the Senate ultimately took no formal action against comics, the scoldings and pressure from people like Fredric Wertham and Eugenia Y. Genovar led the industry to self-impose the Comics Code Authority–which did in fact spell out, among many other rules, that the bad guys must always be punished. It seems, however, that Robert Merdian and other young fans were absorbing that lesson just fine from pre-CCA comics without government intervention.