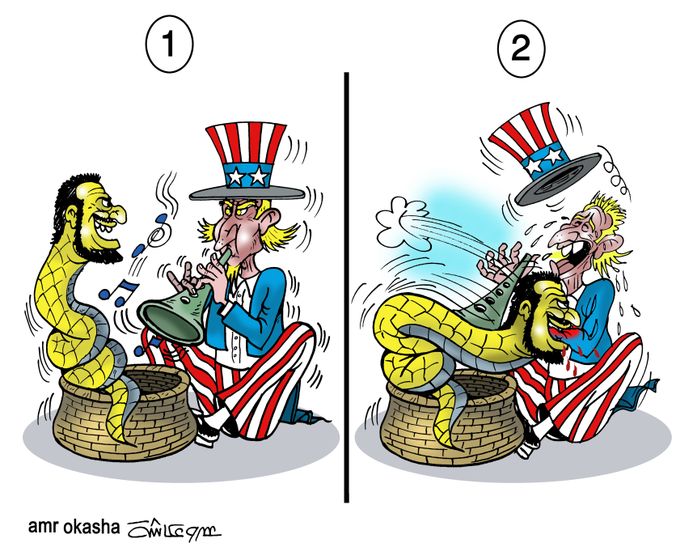 “Another 11 September” by Amr Okasha

There is perhaps no singular instance that better describes the increasing pressure felt by political cartoonists in Egypt than the case of cartoonist Doaa El-Adl and Naguib Sawiris, the owner of Al-Masry Al-Youm newspaper, who are being sued by the National Centre for Defence of Freedoms for drawing and publishing a cartoon the Centre claims is insulting of the prophet Muhammad.

According to Luiz Sanchez of the Daily News Egypt, “The cartoon depicts Adam and Eve standing beneath an apple tree on a cloud. Before them stands an Egyptian man with angel wings and a halo, who declares the couple would have never been expelled from heaven had they voted in favour of the [constitutional] referendum.” Critics of Egypt’s new constitution, which was approved in the referendum, have argued that it unfairly favors Islamists.

The lawsuit was filed by Khaled El-Masry, the Secretary-General of the Centre, with the charge of blasphemy, and accused Sawiris of “abusing freedom of speech to insult people and their traditions. […] Naguib Sawiris is a Christian, but the people working at his newspaper are Muslims and it should not be allowed.” He further declared that “the portrayal of prophets is a red line that we will not tolerate being crossed.”

The cartoonist delivered a stinging indictment of El-Masry, the Centre, and the current state of censorship in Egypt:

El-Adl said she was not worried about the lawsuit because she believes these events are “just deception” and those that politicise Islam look to religion to brainwash people by bringing god closer to the ballot box. “These people will tell you if you vote yes you will go to heaven but if you vote no then you will go to hell,” El-Adl added.

El-Adl points the finger at the Muslim Brotherhood for promoting the opinion that art demeans Islam. “Artistic freedom in Egypt is being attacked, and this will send Egypt backwards fast,” she warned.

El-Adl further discussed the irony of being sued by an organization that is meant to defend freedoms and the reason some Islamists are using litigation against artists:

El-Adl mused at the fact that she was being sued by the secretary-general of a centre aimed at protecting freedoms. This she says is another caricature behind her drawing, “a joke within a joke.” This is not the first time someone has been brought before the law for insulting Islam in one way or another.

“Anyone who tries to draw something with a beard will have it interpreted as an attack on Islam,” El-Adl added, pointing at recent accusations laid against satirist Bassem Youssef and Ibrahim Eissa. She believes Islamists are trying to tarnish the artists’ reputation through such lawsuits, with the aim of forbidding them from saying what they think.

Who can imagine this is the New Egypt that we made a revolution for! As a political cartoonist, I’m facing a much more tense and challenging time than during the Mubarak regime. Now, every time I publish a cartoon, I receive very insulting and offensive comments. Most of these are made by supporters of president Morsi and members of the Muslim brotherhood. They accuse me of being a liberal socialist infidel. They say my criticism of Morsi and the Muslim Brotherhood is criticism of the Islam. Islamist leaders and supporters call any critique on the regime an attack on religion.

Recently, I have published a number of cartoons that seem to have made them mad. I received insulting messages via Facebook as well as in the comment section of my newspaper’s website. Even more alarmingly, a photo of me was posted during a pro-Morsi demonstration last Saturday. My picture was posted along with other photos of public figures in the media; protesters chanted they wanted to get rid of these persons.

I’m going to continue to publish what I see and believe is the truth, but I want to admit that I’m worried too.

What’s happening to Egyptian cartoonists such as El-Adl and Okasha goes beyond simply disagreeing with a cartoonist’s political statement. Freedom of speech applies to both the creator and the consumer, after all, but El-Adl and Okasha are being attacked personally and through channels that seek to limit their right to creative expression. El-Adl and the newspaper that publishes her cartoons are being attacked through legal avenues (a practice not unlike the use of SLAPP lawsuits here), while Okasha’s personal image was flashed before a hostile crowd. As a result, both artists are feeling pressure to stop speaking out through their art.