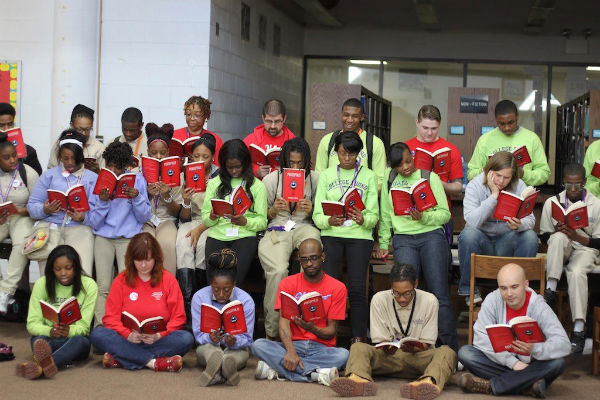 Two weeks after the news broke that Chicago Public Schools officials had removed Marjane Satrapi’s graphic novel memoir Persepolis from 7th grade classrooms and placed it “under review” for use in 8th-10th grades, reactions continue to pour in from various sources. Read on for a selection of viewpoints on Persepolis and the CPS ban from students, a teacher, and another Iranian expatriate artist.

In a short article that originally ran in The Chicago Tribune’s “Printers Row” book supplement, editor Jennifer Day points out that she strongly recommended the book be read in schools when she first reviewed it back in 2003, and CPS administrators’ weak protestations that it is somehow inappropriate for young readers have done nothing to change her opinion:

History is violent, yes. And it’s disturbing, too. What better place to learn about it than within the safe, educational framework of school?

Meanwhile, over at the Huffington Post, Chicago history teacher Dave Stieber recounts how he took Day’s advice and assigned his 71 TEAM Englewood Community Academy students to read Persepolis. Stieber then asked them to think about why the district might want to suppress the book and whether the ban was justified. Fifty-three students thought the book should not have been removed from classrooms, while most of the remaining 18 said the question of whether or not the book is used in classrooms it should be left up to teachers, who know what their students can handle.

Other students questioned why this particular example of historical violence should be off-limits when others are not. Said a student named Ty’Neequa:

This is something that actually happened, just like people were tortured and killed in the Holocaust. CPS shouldn’t be able to keep information like this from students. We need to learn about revolutions in other countries. The banning of Persepolis would be like CPS trying to prevent teachers from teaching slavery.

This assessment is right on the nose, as the CPS effort to remove Persepolis is reminiscent of nothing so much as the 1983 Alabama textbook adoption committee that decided not to include Anne Frank’s Diary of a Young Girl in the curriculum because it was “a real downer.” The childhood memoirs of both Frank and Satrapi provide age-appropriate opportunities for other children and teens around the world to begin to explore very real and enduring issues such as war, torture, genocide, and government repression. In attempting to shield students from even a moment of distress or critical thought about world politics, adults do them a great disservice.

This connection to world politics is further explored in a post by Sarah Nardi at the Chicago Reader’s Bleader. Nardi talked to Ario Mashayekhi, who, like Satrapi, is an Iranian expatriate artist. In questioning why CPS waited until a decade after the initial publication of Persepolis to remove it from classrooms, Mashayekhi points out one thing he learned from the Iranian regime: censorship “has nothing to do with protecting children….It’s about controlling the flow of information” at a time when tensions between the United States and Iran are ratcheting up. Luckily CPS administrators can’t suppress Persepolis everywhere, but their attempt to withhold it from certain students is at once telling and alarming.

← Griffith, Tamaki, Dorkin, Fingerman Sign With CBLDF at MoCCA Arts Festival!
Political Cartoons: Fuel For Revolution or a Reflection of the Fire? →