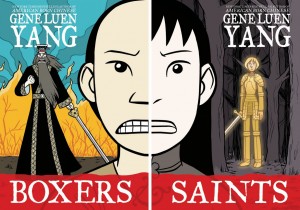 One of our missions here at CBLDF is promoting the use of comics and graphic novels in schools — hence our publications Raising a Reader! How Comic & Graphic Novels Can Help Your Kids Love to Read! and CBLDF Presents Manga: Introduction, Challenges, and Best Practices, as well as Meryl Jaffe’s column Using Graphic Novels in Education. So, we were thrilled to see the Washington Post’s comics blogger Michael Cavna recently feature 10 graphic novels from 2013 that should be embraced by educators to “smartly employ the resources of visual learning.”

Cavna’s essay is inspired by the experience of a young relative, whose grade school teacher forbade her from doing a book report on David Hall’s Stitches — or even reading it in the classroom — because “Graphic. Novels. Aren’t. Books.” Although he notes that this attitude is increasingly rare, Cavna argues that more graphic novels deserve to be not simply tolerated as leisure reading, but incorporated into the curriculum. After all, he says:

Why not use every effective teaching tool at our disposal? Decades of studies have shown the power of visual learning as an effective scholastic technique. Author Neil Gaiman…recently noted that comics were once falsely accused of fostering illiteracy. We now know that comics — the marriage of word and picture in a dynamic relationship that fires synapses across the brain — can be a bridge to literacy and a path to learning.

With so many curriculum-worthy graphic novels in just one year, Cavna expresses hope that “the persistent empty prejudices against such works will fall.” Obviously, he says, the challenge the graphic literature must overcome in schools is “not one of providing quality stories, but of recasting public perception of the illustrated medium — and educators stand smack on the front lines of shifting perspective.” Stay tuned to CBLDF for more resources to aid in that transformation!