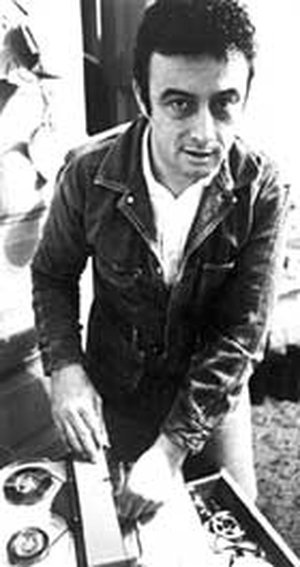 April 3 marked the 50th anniversary of Lenny Bruce’s arrest in New York on obscenity charges. His crime? Using phrases such as “jack me off,” “nice tits,” and “go come in a chicken” in his stand up routine. Within the year, he was convicted of obscenity, a conviction that would stand until 2003, when New York Governor George Pataki pardoned Bruce nearly 40 years after his death.

By today’s standards, Bruce’s stand up routine is relatively tame. He was know for his dark and satirical comedy, which often tackled taboo topics and incorporated profanity. Because of the latter (and because of an ongoing struggle with drugs), Bruce butted heads with the law several times throughout his short life (he was only 40 when he died of a morphine overdose). In addition to New York, Bruce was also arrested on obscenity charges in San Francisco, Hollywood, Los Angeles (twice), and Chicago. He was ultimately acquitted in San Francisco and in one of the Los Angelese cases, in part because of Roth v. United States. The Hollywood and one of the Los Angeles charges were consolidated into one trial that resulted in a hung jury. In Chicago, Bruce was convicted in absentia, and the conviction was ultimately vacated by the Illinois Supreme Court as a result of Jacobellis v. Ohio.

Bruce couldn’t shake the obscenity charges in New York. He was arrested with Howard Solomon, and both were convicted of obscenity on November 4, 1964. Solomon’s conviction was overturned on appeal, but Bruce’s conviction stood because he died before appeal. In 2003, when a team of First Amendment advocates, including CBLDF General Counsel Bob Corn-Revere, convinced New York Governor George Pataki to issue Bruce the first posthumous pardon in the state’s history. Governor Pataki characterized the pardon as “a declaration of New York’s commitment to upholding the First Amendment.”

Bruce wasn’t the only comedian to run afoul of would-be censors — George Carlin had his own brush with obscenity — nor have censors stopped attacking comedians today. For example, Egyptian comedian Bassem Youssef was arrested for mocking the country’s president and satirist Sabina Guzzanti was almost prosecuted in Italy for attacking Pope Benedict XVI.

What is is about comedians that makes them the targets of censors? They use humor — and often push boundaries when they do so — to turn the mirror on human behavior, revealing the most ridiculous and foolish parts of ourselves. Maybe the censors just don’t like what they see and feel the need to take it out on the person holding the mirror up for them.