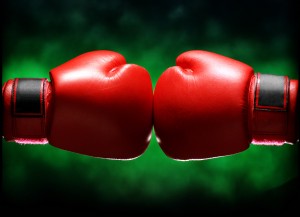 From events like the attack on Charlie Hebdo to the governmental persecution of cartoonists around the world, in light of what seems to be a disturbing increase in attacks on free speech a series of questions continue to come up in both the mainstream media and on the internet: what is satire and, most importantly, what constitutes free speech and protected press?

As Jordan Fraade points out in a column for AlJazeera America, this line of questioning is not only dangerous, but opens the door for individuals and groups to come up with subjective definitions that defeat the intent and purpose behind speech like satire in the first place. With the opening of these questions into public forums depending on who is leading the discussion you are invariably left with biased definitions that not only determine one kind of speech to be satire, but subsequently sequester all other forms of speech as “hate speech.”

It becomes the punch up-punch down dichotomy and depending on who is doing the talking, in one situation the editorial decisions made by the Charlie Hebdo offices can be perceived as punching up and initiating empowering conversations about established institutions—they are satirizing the privileged—or in a radically different situation the cartoons published in Charlie Hebdo are punching down on a disenfranchised group of individuals—they are spreading hate speech which is not universally identified as protected.

Fraade points out that arbitrary rules like punch theory assume that satire exists in a vacuum, but this is very much not the case:

Looking at satire this way has the potential to do real damage. For one, it obscures the culturally specific contexts that make satire effective in the first place. The very question, ‘What is satire?’ is contingent upon personal, very heavily disputed judgments about identity. Was Charlie Hebdo satirizing an oppressed group (French Muslims) or a powerful institution (organized religion)? Does Jon Stewart punch down at the poor rubes of America’s heartland or punch up at the elite politicians who hoodwink them? We all have strongly held notions about identity and power, affected by factors including race, class, gender, religion and sexual orientation. It’s the height of naïveté to assume others, even our political allies, share all of our intuitions about where a certain group lies on the punching scale.

More than just leading to false assumptions and conclusions, though, Fraade argues that this kind of dichotomous, black-and-white thinking meant to establish “rules” for determining what is satirical and what is hateful forces all speech to a standstill, and more disturbingly it leads to censorship.

This is perhaps the greatest symptom that has arisen in light of recent events and attempts to define speech. Cartoonists and journalists have become so physically afraid of saying the wrong thing—initiating hate speech that has the potential to lead to violence—that they stop saying anything at all. Whether it be out of fear of governmental retaliation similar to what we are currently seeing in India or Iran, or out of a sense of self-preservation and for security reasons, the point is that sadly there has been a significant rise in self-censorship. Asking cartoonists and journalists to take the time to contemplate and justify their works as confirmed satire is only further complicating a form of speech that doesn’t have or need a firm definition.

By asking these questions we are disclosing a fundamental insecurity about how we think and how we think we should be speaking. By testing what is satire we are censoring how we choose to talk about our world for fear that we might offend. Fraade advocates abandoning such restrictions:

There is a better way: Let satire be what it is. No litmus tests, no debates about which way something is “punching,” no limiting the label “satire” to those who check off a series of boxes to prove they will not offend. Many examples of satire, as with many examples of other genres, will remain hurtful and offensive to large groups of people. There is no reason not to subject such works to critique. But the No True Scotsman game of claiming satire must adhere to certain “rules” not only misfires tactically but also erases the diverse ways humor is practiced around the globe.