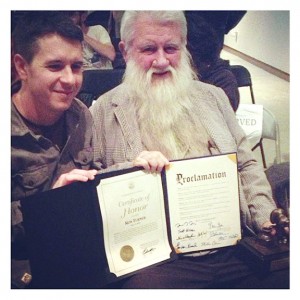 Underground comix legend and Last Gasp founder Ron Turner got some well-deserved recognition from his home city of San Francisco this week, as the Cartoon Art Museum and the Charles M. Schulz Museum presented him their annual Sparky Award which “celebrates the significant contributions of cartoon artists who embody the talent, innovation, and humanity” of the Peanuts creator. In conjunction with the surprise ceremony, the San Francisco Board of Supervisors also proclaimed May 5, 2015 to be Ron Turner Day in the city!

CBLDF Executive Director Charles Brownstein, also a Last Gasp alumnus, had this to say about the honor bestowed on his old boss:

It’s so wonderful to see Ron receive this honor!  Ron’s efforts at Last Gasp on behalf of comics and free expression made the comics we enjoy today possible. He was a patron of Zap, the Air Pirates, Wimmen’s Comix, Justin Green, S. Clay Wilson, Dori Seda, and countless other creators and collectives who changed the face of the comics art form.  In recent years, he’s quietly looked after the legacy and well being of the Underground Comix generation in direct, humanitarian ways.  And this is on top of all the other humanitarian causes he’s involved with.

As dedicated as he is to artists and writers through the business of Last Gasp, Ron is equally invested in the cultural life of the city of San Francisco.  He’s done a great deal to nurture and encourage independent art and literary culture in the Bay Area for more than forty years.  In fact, most days you can even catch him driving around town, personally making deliveries to booksellers all over the city.

This is a very well deserved honor for a kind, hard-working, and generous soul.  Congratulations, Ron!