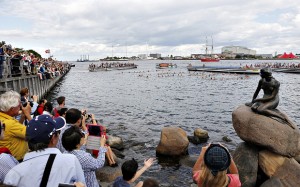 A national icon — the Little Mermaid statue in Copenhagen, Denmark — has become the latest victim to Facebook’s vague and seemingly selective nudity policy.

When Social Democrat MP Mette Gjerskov tried to include a picture of the 103-year-old bronze statue as the main image on her Facebook, it was reportedly blocked by the media site for containing “too much bare skin or sexual undertones.”

The statue, sculpted by Edvard Eriksen in 1913 based on the Hans Christian Andersen fairy tale of the same name, has become a national treasure for Denmark. Attracting millions of visitors each year to the Langelinie promenade, where the mermaid proudly sits upon a rock overlooking the waterfront, Gjerskov was needless-to-say shocked when she learned that she wouldn’t be able to include an image of the statue as it was too risqué for Facebook. “The Little Mermaid is simply too naked for Facebook,” commented Gjerskov in a translated Facebook post. “I cannot advertise for my blog because TV2 chose the mermaid as the [main image]. I hadn’t seen it coming that our national treasure would be categorized on the same level as child pornography and that sort of abomination.”

Facebook’s subjective policy on nudity — whether it be natural or artistic — has become a hot debate in the past year. Last year, an official book trailer advertisement for Michael Lemberger’s After Abel and Other Stories that included various medieval and Renaissance artworks depicting nude women was banned for violating the site’s guidelines for posting advertisements — guidelines that are explicit about not promoting the sale of adult products, but not depicting classic art. A French primary school teacher also sued the media giant last year, contesting the suspension of his account for posting an image of Gustave Courbet’s notorious painting L’Origine du monde.

Facebook is within their rights to set their own rules and guidelines, but many have raised concerns over seemingly arbitrary enforcement of those policies and have expressed concern that they disproportionately target female nudity. The current policy regarding nudity, including photographs of artwork, reads:

So, what happened with the Little Mermaid? In a quick reversal of their initial decision, Facebook unblocked the image and allowed it to be included on Gjerskov’s page. Sadly, though, the picture was removed once again for risk of violating the Eriksen family’s copyright on all images of the artist’s statue.

“TV2 has removed the Little Mermaid from my blog because it risks a large bill due to the copyright,” wrote Gjerskov. According to Danish copyright law, the creator of an artistic work holds copyright as a way to protect the artist and their works. No registration is needed, and the copyright is held for up to 70 years after the creator’s death (Eriksen died in 1959 and his family is famously protective of his copyright). Without asking permission, violators of Danish copyright laws could face thousands of dollars in fines noted Danish news site The Local.

Facebook made the correct decision in reinstating the image, but it was ultimately subject to the law of the land. Gjerskov notes, “Apparently one can’t publish photos of our national treasure without a substantial payment to the artist’s heirs. That’s the law — approved by parliament.”