Monadnock Regional High School art teacher Emily Bialek didn’t just want her Swanzey, New Hampshire, students to create art. She wanted them to use art to help foster learning about larger topics that extended beyond the canvas. Her idea: have her students pick a banned book and recreate the cover based on what they had read.

Done in collaboration with school librarian Patrice Campbell, Bialek decided to implement this integrated project when she became inspired by the annual Banned Books Week event. For three weeks, her students read books included on the American Library Association’s challenged book lists. Then, they painted new 16-by-20 inch reinterpretations of their covers.

From classics like Of Mice and Men and Alice’s Adventures in Wonderland to contemporary books like The Book Thief and The Perks of Being a Wallflower, “I think they came out beautifully,” Bialek said. “I couldn’t be happier with them.” As the students created their covers, Bialek noted that many of them had no idea that the books had been banned, let alone understood the idea that books could be banned. “Some of them were just absolutely floored,” she said. “They couldn’t believe it.”

Every year, books continued to be challenged and banned in schools and libraries across the United States. Just last year, CBLDF joined a coalition to defend the inclusion of Of Mice and Men in 9th grade classrooms in Coeur d’Alene, Idaho. Although that case resulted in a victory, other books continue to face challenges in certain communities. The school system in Wallingford, Connecticut, removed The Perks of Being a Wallflower from their curriculum, and despite a letter to the school superintendent from CBLDF and other free speech advocates and a public response from the author, the book continues to be banned. 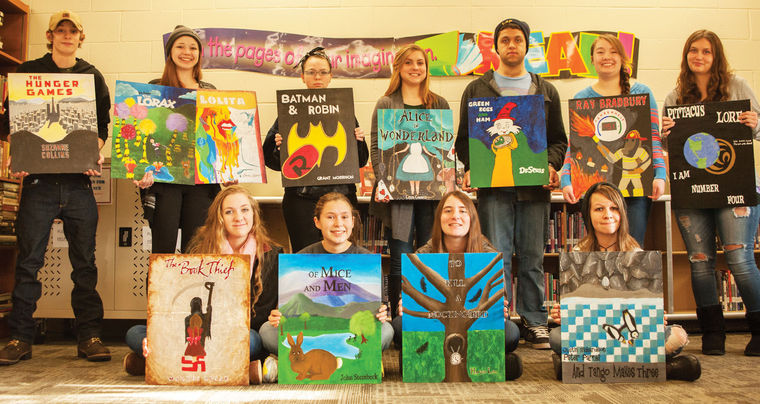 In Swanzey, though, Bialek is teaching her students to appreciate the books before they get to the point of being banned. The dynamic combination of reading and creating inspired the students and helped them engage with the material in a way that they hadn’t before. “Kids were just surprised at how many books had been banned at one time or another,” noted librarian Campbell. “It just sparked a really interesting discussion.”

That discussion opened up to a larger one, expanding into an AP and honors English class, where the concept of banned books and the importance of reading and everyone’s right to choose what they want to read was talked about further.

Needless to say, the students of Monadnock Regional High School have a new appreciation for these books and a new understanding about the importance of protecting their right to read. “It’s important to have them available and to have a range of things,” Campbell reminds us. “I remember reading The Perks of Being a Wallflower and thinking, ‘This is a contemporary Catcher in the Rye. This is what life is like in high school and gives a voice to a lot of high school students.’”