Why are so many diverse books banned? The 2016 celebration of Banned Books Week will examine this important question as part of its thematic focus on diversity, the event’s national coalition announced today. Banned Books Week, the annual celebration of the freedom to read, will run from September 25 – October 1, 2016, and will be observed in thousands of libraries, schools, bookstores and other community settings across the nation and the world.

It is estimated that over half of all banned books are by authors of color or contain events and issues concerning diverse communities, according to ALA’s Office for Intellectual Freedom. This year’s Banned Books Week will celebrate literature written by diverse writers that has been banned or challenged, as well as explore why diverse books are being disproportionately singled out in the first place.

“It’s alarming to see so many diverse voices facing censorship,” says Charles Brownstein, chair of the Banned Books Week Coalition. “2016’s Banned Books Week is an important moment for communities to join together in affirming the value of diverse ideas and multiple viewpoints. By shining a light on how these ideas are censored, we hope to encourage opportunities to create engagement and understanding within our communities, and to emphasize the fundamental importance of the freedom to read.” 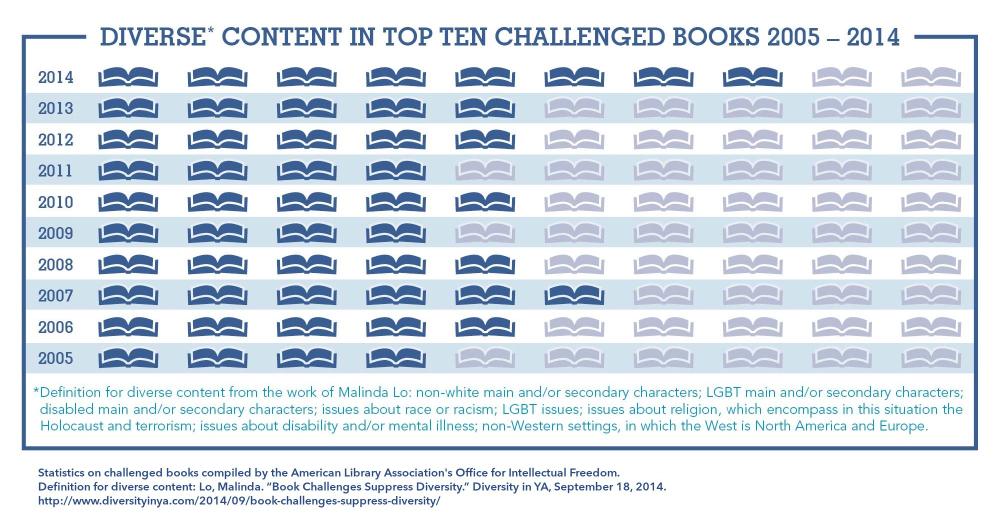 The Banned Books Week Coalition is a national alliance of diverse organizations joined by a commitment to increase awareness of the annual celebration of the freedom to read. The Coalition seeks to engage various communities and inspire participation in Banned Books Week through education, advocacy, and the creation of programming about the problem of book censorship. The Coalition will be partnering with library, reader, and author groups, including We Need Diverse Books™ to bring meaningful conversation to this year’s programming.

Individuals, institutions, and other groups seeking to join in the celebration are encouraged to visit www.bannedbooksweek.org to learn how to become involved. BannedBooksWeek.org is a hub for information, activities and resources to help encourage communities to be a part of the celebration of the week. Join the conversation using #BannedBooksWeek, and follow activities on twitter and facebook.