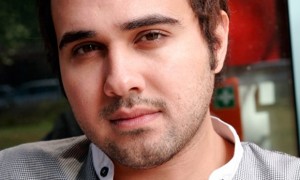 Egyptian novelist Ahmed Naji was sentenced to two years in prison this weekend for “violating public modesty” with an excerpt from his book Use of Life, which was published in a state-owned newspaper two years ago. Naji was previously acquitted in January, but the prosecution was able to appeal that verdict, and he received the maximum sentence this time around.

Use of Life is an experimental work that incorporates visual elements, including comics drawn by Ayman al-Zorkany. The excerpt printed in 2014 in Akhbar al-Adab newspaper included references to sexual acts and drug use, and the 65-year-old reader who brought the charges claimed that it caused him heart palpitations, a drop in blood pressure, and severe illness. In addition to Naji’s prison sentence, the newspaper’s editor Tarek el-Taher also received a fine equivalent to about $1,300.

Naji now has one more chance for appeal to the Court of Cassation, but meanwhile he was taken into custody directly after the verdict was handed down on Saturday. Asked about the likelihood of success on appeal, Naji’s lawyer Mahmoud Othman responded that “we hope the judiciary will respect the constitution so it’s not just ink on paper.” Article 67 of the Egyptian Constitution states the following:

Nevertheless, the authoritarian government of President Abdel Fattah el-Sisi has recently cracked down on expression from both the secular left and Islamists such as the Muslim Brotherhood. Just this month, popular cartoonist Islam Gawish was detained overnight on suspicion of running an “unlicensed website” which may have been his own Facebook page. Although he was ultimately released without charge, Naji and many others have not been so lucky. In an online petition condemning the verdict, the Tahrir Institute for Middle East Policy described the current repressive atmosphere in Egypt:

Not only is the verdict unconstitutional, but it comes in the context of a broader crackdown that has seen the detention of academics at airports, the harassment of cartoonists for their artwork, and the raiding of publishing houses and art spaces. The Egyptian government’s inability to deliver on its promises for security or economic development has led to authorities’ crackdown on all forms of expression. Today’s case speaks to the government’s manipulation of conservative sentiments in society while posing as guardians of morals and religion, at the expense of its citizens’ rights and freedom.

Sign the petition here, and stay tuned for updates as Naji’s appeal proceeds in the coming months!