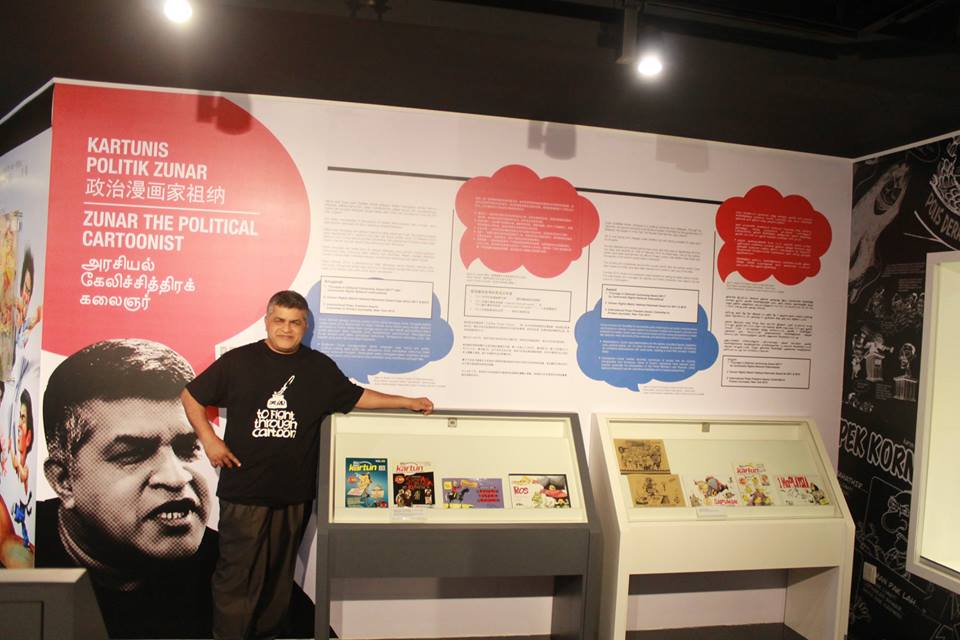 There’s some rare good news for Zunar this week: despite the nine charges of sedition currently hanging over his head, the Malaysian political cartoonist’s work is now on display in a dedicated section of the brand-new Asia Comic Cultural Museum in his home state of Penang. Even though he is the country’s best-known political cartoonist by far, this is the first time his work has been officially exhibited in public.

Past experience has shown that the new museum would have good reason to be wary of any association with Zunar: authorities have harassed printers who printed his books, retailers who sold them, and even the payment processor that handles transactions through his website. But museum curator Hew Kuan Yau said when planning the new space, there was no question that “he deserves a special zone in our museum.” Zunar’s books are also for sale in the museum gift shop.

Zunar’s sedition trial is currently set to begin on April 7, although it has already been delayed multiple times pending a decision on a separate challenge to the country’s entire Sedition Act. If convicted on all nine charges, he risks up to 43 years in prison. The charges stem from statements that Zunar made on Twitter last February following the sentencing of opposition leader Anwar Ibrahim on a trumped-up sodomy charge. The cartoonist hinted that the judiciary in that trial had been subject to political pressure or bribery, observing that “the lackeys in black robes are proud of their sentences. The reward from political masters must be plenty.” He then exchanged Twitter barbs — and a cartoon — with Inspector-General of Police Khalid Abu Bakar as officers were en route to arrest him.

While awaiting the trial, take a moment to sign the International Federation of Journalists’ petition calling on the government to drop the charges. Cartoonists Rights Network International also provides a convenient form letter to send to Malaysian embassies.