Did you know that there’s a law on the Canadian books that can land the owner of comics that depict crime in jail? From contemporary crime to even your favorite superhero book, Global News’ Elton Hobson talks about one of the remaining enforceable vestiges of Canada’s own great comics scare of the 1940s and 1950s.

The “Fulton Bill” was established 1949 with the intention of combatting the rise in consumption of crime comics, which officials and child psychologists deemed to be dangerous and the direct link to the rise in juvenile delinquency. “[W]hat you have to remember about this is that at the time,” notes Bob Tarantino, media and entertainment lawyer for the Global News, was that

Comic books were really being purchased by young children and teenagers as an almost normal part of their entertainment consumption. So we’re talking about hundreds of thousands of, not millions of copies being purchased every single year for about 15 years.

For MP E. Davie Fulton, whom the bill was informally named after and who spearheaded the campaign against comics in Canada, crime comics meant trouble. “The evidence shows that there is a real menace to the youth of this country in the widespread publication and circulation of crime comics,” Fulton argued in the House of Commons on October 4, 1949. 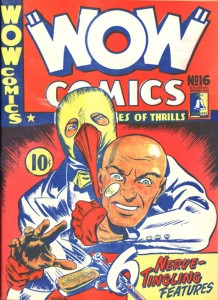 Shortly thereafter, Section 207 of Bill 10, which dealt with obscenity, was revised to make the possession of any printed materials depicting crime — real or fictitious — illegal and a punishable offense. Similar to Senator Estes Kefauver and Dr. Fredric Wertham’s crusades against comics, the U.S. Senate Subcommittee Hearings of 1954, and the establishment of the Comics Code Authority (CCA) and Comics Code, Bill 10 was Canada’s take on government-mandated censorship of comics. Much like the Comics Code, it has had a lasting impact on the country’s comics industry that can still be felt to this day.

Although we’ve seen the end of the infamous reign of the Comics Code, the anti-crime comics bill still remains on the books in Canada. Today, though, it is simply noted as Section 163, 1b of the Criminal Code of Canada. Included under the “Offences Tending to Corrupt Morals” section of the Criminal Code, the law reads that legal action can be taken against anyone who:

(b) makes, prints, publishes, distributes, sells or has in his possession for the purpose of publication, distribution or circulation a crime comic.

There it is, in black-and-white: Anyone who produces, sells, or simply owns a “crime comic” can face up to two years in jail. Alongside crime comics, Section 163 also outlines obscene publications, such as child pornography, or other publications that show the “undue exploitation of sex, or of sex and any one or more of the following subjects, namely, crime, horror, cruelty and violence.” 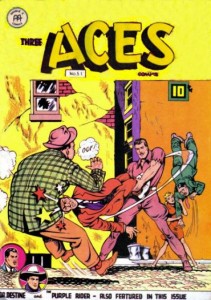 As Hobson points out, too, the language of the law is such that it applies not just to crime comics. Superhero books, action titles, you name it — if it depicts crime, technically the possessor is breaking the law. “The letter of the law is drafted sufficiently broadly so that virtually any superhero comic book that we’re familiar with today would violate the letter of the law,” said Tarantino.

Despite the law’s continued existence, it hasn’t thankfully been cited in a legal case since 1987, when a Calgary-based comic retailer faced charges for the books they carried — a case defended by the Comic Legends Legal Defense Fund (CLLDF). “I suspect if you called the police and tried to report the sale of a crime comic, they’d likely laugh at you and hang up,” Bob Tarantino said.

Prosecutorial cases now tend to relate to the possession of obscene materials, and, as such, Section 163, 1b remains an antiquated piece of Canada’s own contentious comics censorship history.

If you’re interested in learning more about the comics scare of the 1950s in the United States, check out CBLDF’s History of Comics Censorship series as well as our numerous resources on the Comics Code.

← Writers and Readers Come Together to Support Jailed Egyptian Novelist
A Rare Opportunity to Take Home a FRANK MILLER Original! →