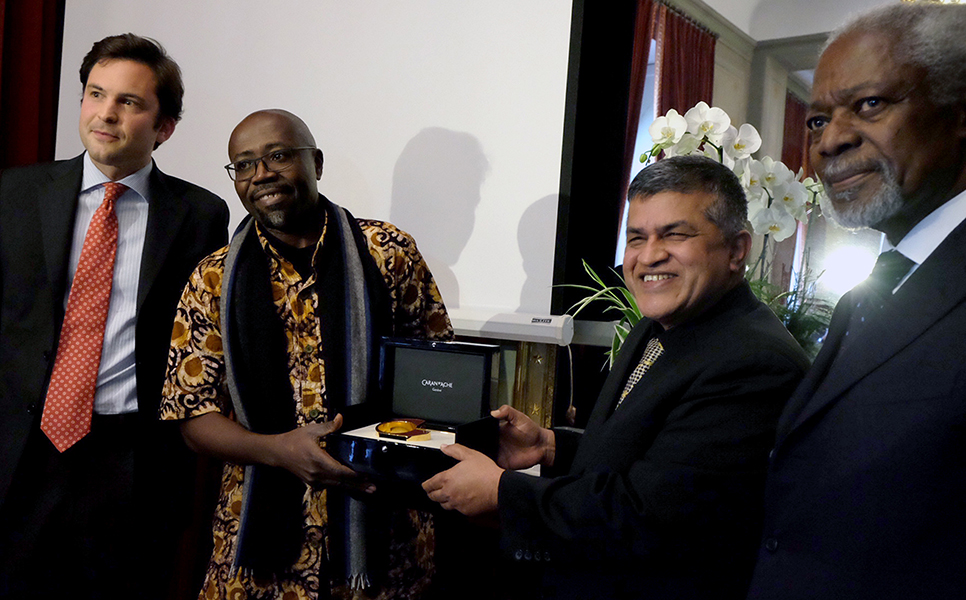 In recognition of their respective fights against censorship and repressive governments, political cartoonists Zunar and Gado have been jointly awarded the biennial International Editorial Cartoons Prize from the organization Cartooning for Peace. In conjunction with the prize, their work and that of many other cartoonists from around the world is on display in Geneva, Switzerland, through June 4.

In his native Malaysia, Zunar is currently facing nine counts of sedition which could result in up to 43 years in prison. The charges stem from statements that he made on Twitter last February following the sentencing of opposition leader Anwar Ibrahim on a trumped-up sodomy charge. The cartoonist hinted that the judiciary in that trial had been subject to political pressure or bribery, observing that “the lackeys in black robes are proud of their sentences. The reward from political masters must be plenty.” He then exchanged Twitter barbs — and a cartoon — with Inspector-General of Police Khalid Abu Bakar as officers were en route to arrest him. His trial has been postponed at least four times while separate challenges to Malaysia’s Sedition Act were pending.

From 1992 until quite recently, Gado was employed by Kenya’s largest newspaper the Daily Nation. Although the newspaper had long supported his fearless cartoons skewering corruption in the governments of Kenya, Tanzania, and other countries in the region, things changed after new laws passed in 2013 made it illegal to defame the Kenyan Parliament and other government entities. After a forced sabbatical last year, the Daily Nation opted not to renew his contract–a decision that he and his supporters say was made under pressure from authorities.

The two received the prize in Geneva on Tuesday, World Press Freedom Day, from Cartooning for Peace Honorary President and former UN Secretary-General Kofi Annan. In a press release about the award, Annan praised their courage and commitment to freedom of expression:

Gado and Zunar remind us how fragile this liberty remains in Africa and in Asia as well as in other regions of the world. Through their commitment towards open and transparent societies, Gado and Zunar, who have received threats in their countries of origin and can no longer practice their profession, confront us with our responsibility to preserve freedom of expression and act in order to support the combat of those who cannot express themselves through their art.

The open-air cartoon exhibition held in conjunction with the prize is currently on display at Geneva’s Quai Wilson. In addition to work by the two prizewinners, the exhibit features cartoons from around the world on the themes of Exodus, Liberty and Security, Cyber World, and Planet Earth.