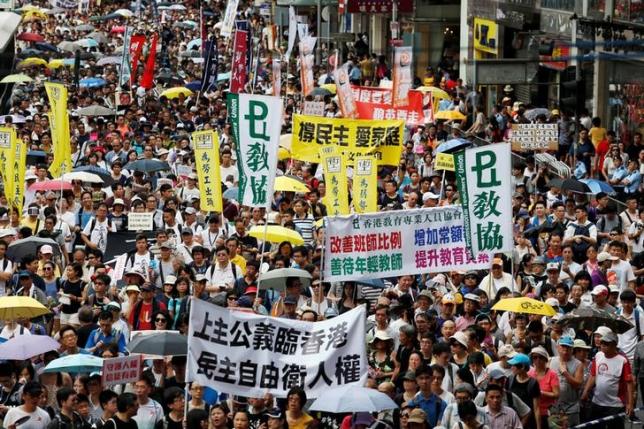 Thousands of Hong Kong residents joined pro-democracy demonstrations last weekend, following local bookstore manager Lam Wing Kee’s revelation that he was involuntarily detained for eight months on the Chinese mainland as authorities there sought information about customers and the books he sold them. The incident represents the latest breakdown in the “one country, two systems” policy to which China agreed in 1997, when the former British territory of Hong Kong returned to Chinese control.

Demonstrations happen every year on July 1, the anniversary of the transfer, but in recent years “the turnout has served as a barometer of discontent,” according to the New York Times. Objective numbers are difficult to pinpoint, but this year’s turnout ranged from 20,000 (police estimate) to 110,000 (organizers’ estimate). Lam himself had planned to lead the march, but backed out at the last minute over concerns for his safety. For two days prior to the demonstration, he had been followed by “people he did not recognize.”

Lam was the manager of a Hong Kong bookstore owned by Mighty Current Press, which specializes in gossipy titles such as Overseas Mistresses of the Chinese Communist Party and Secrets of Wives of Chinese Communist Party Officials. In addition to Lam, four others associated with Mighty Current disappeared over a period of a few months last year: fellow store employee Cheung Jiping, the publisher’s co-owners Lu Bo and Gui Minhai, and editor Lee Bo.

Hong Kong has no extradition agreement with the mainland, and Lam certainly has no plans to return there voluntarily despite Chinese authorities’ request. This week the Hong Kong secretaries for justice and security met with a mainland counterpart “about the booksellers’ case and the mechanism for informing Hong Kong about the detention of residents in the mainland.”

Mighty Current’s co-owner Gui Minhai is the last of the five men remaining in custody on the mainland. His daughter Angela Gui, a graduate student in the UK, has started a Twitter account to share updates on the case and pressure Chinese authorities to release him.