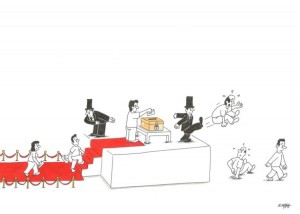 Since the attempted coup in Turkey, the country’s administration has been arresting and silencing journalists and cartoonists in the country, so Cartoon Movement sat down with four cartoonists — Menekse Cam, Emrah Arikan, Halit Kurtulmus and Oguz Gurel — to discuss the state of affairs and what it means to be a satirist in their home country today.

“At present, cartooning in Turkey is really more dangerous than ever,” says Cam. Since the failed coup attempt in July, President Recep Tayyip Erdoğan’s regime has shut down more than 130 press outlets, removed journalists’ credentials, and most alarmingly, issued numerous warrants and arrested cartoonists, including Turkish-born cartoonist Dogan Guzel, who was arrested alongside 20 other colleagues from the Kurdish newspaper Özgür Gündem. This isn’t a new development coinciding with the failed coup: since Erdoğan took office, the state of free press within Turkey has become increasingly unstable and a major point of contention within the global community and free speech organizations. “Anyone may be arrested and anyone may go to jail,” continues Cam. The coup has exacerbated the situation, says Cam:

I must admit that since the supposed coup attempt, I haven’t drawn cartoons about Erdoğan and Turkish politics. Because I want to see the road ahead; because I really need to know if I’m safe or what will happen after all this.

Despite, President Erdoğan’s attempts to stifle free speech and the media, several cartoonists and journalists have stood firmly behind their work and see cartooning as a mechanism to drive social change. “In my opinion cartooning is most important form of satire, because it has a great mission,” notes Cam. “It creates awareness when something goes wrong. In a country like ours, drawing editorial cartoons is a form of activism.”

Satire has a rich history in Turkey and has been a vehicle for discussing the state of politics since the 1860s, during the Ottoman period. From the first cartoon magazine Diyojen, first printed in 1870, to the celebrated works of Cemal Nadir Güler, who is credited as one of Turkey’s first humor cartoonists, “Even in the most difficult years, the old masters made use of cartoons to inform society about the issues which were difficult to write about in the press,” comments Kurtulmus.

Although things seem to be getting worse, Cam optimistically notes that the oppression being exercised against cartoonists is a temporary state. Most importantly, cartoons speak to a new generation of tech-savvy citizens in ways straight words may not and are inspiring young groups of activists to find innovative ways to speak out about censorship. Despite President Erdoğan’s famous ban of Twitter, young people are finding ways to circumvent the ban, and in similar fashion, cartoonists are finding ways to circumvent media censorship.

For Cam, Arikan, Kurtulmus, and Gurel, cartoons are the “voice of the people,” “the memory of a society,” and have the “power to contribute to a better future.”

To read the full interview by Cartoon Movement, click here.