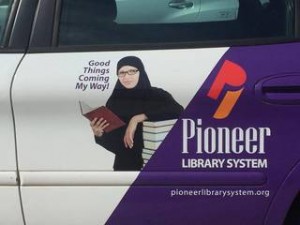 An Oklahoma man has publicly objected to a promotional photo from his local library system that shows a Muslim woman wearing hijab and reading a book. Norman resident Chad Grensky alleges that the photo is an unconstitutional endorsement of one religion over others, even though it is just a small part of the Pioneer Library System’s “Good Things Coming My Way” campaign, which shows diverse community residents using library resources.

The photo in question is part of a vehicle wrap on a car that PLS staff drive to outreach and training events. The large library system in the southern suburbs of Oklahoma City owns 10 other vehicles currently bearing similar wraps, and director Ann Masters explains that they accurately represent the library’s diverse user base:

There are a total of 20 different images that demonstrate young people and older people, people of different cultures and races. Each image is unique and different. What they have in common is that they all have either a book or an iPad or something seen to be the use of a service of the library.

Even after speaking to Masters and learning the extent of the promotional campaign, Grensky told The Oklahoman newspaper that he would be satisfied only with the removal of the hijabi woman’s image, or the addition of people of other faiths to that single vehicle. Masters has confirmed with the library system’s attorney that the image does not constitute a religious freedom violation, but said “the library system has not yet decided what action it will take regarding the depiction.” She did however elaborate on the intentions behind the promotional campaign:

What we were trying to express through those words and those images was that regardless of age or gender or race or nationality or disability or other cultural connections, the library welcomes people with each of these ties to the community. We didn’t intend to promote any religious belief and we don’t think we did. We don’t view the image as an endorsement or disapproval of any religious belief.

As of this writing, public posts to the PLS Facebook page are overwhelmingly positive, with Muslims and non-Muslims alike sending messages of support and thanks for designing an inclusive campaign.