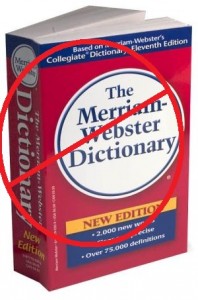 The absurd lengths required to maintain censorship were once again illustrated this week, this time by numerous Chinese consumers who noted that their government routinely “edits” English-language dictionaries before they’re sold, specifically by covering up or otherwise eliding the entry for Taiwan because it contradicts China’s official line on the disputed island. Most recently, a customer of the state-run Shanghai Foreign Language Bookstore noticed that two entire pages had been ripped out of every Merriam-Webster dictionary on sale there.

While China’s government considers Taiwan to be a wayward territory that will someday return to Chinese control, Taiwan and much of the rest of the world disagree. Officially, however, the People’s Republic of China (the Chinese mainland) and the Republic of China (Taiwan) coexist under what is known as the “One China Policy,” which maintains that both sides claim sovereignty over the entire Chinese territory. (Due to decades-old negotiations, the U.S. government also recognizes this policy, which has stymied its diplomatic relations with Taiwan.) In practice, though, Taiwan carries on as an independent democracy; only 3.5% of Taiwanese respondents to a 2014 poll self-identified as exclusively Chinese nationals.

Merriam-Webster and other English-language dictionary publishers, attempting to succinctly reflect this complex situation, define Taiwan as its own nation. Chinese consumers would be hard pressed to find that definition in print, though; in a discussion on Twitter this week, several people noted that the Taiwan entry has often been blacked out with marker or covered up with a sticker in every single copy. More recently, it seems that authorities may have found it more expedient to simply rip out entire pages, regardless of collateral damage to surrounding definitions.

As the Washington Post points out, China is not the only country that engages in Orwellian suppression of basic facts regarding disputed territories. India, for instance, “edits” foreign magazines such as The Economist and Time if they contain maps that accurately reflect the complex three-way dispute over Kashmir, part or all of which is claimed by India, Pakistan, and China.

Even in the United States, simple dictionary definitions have occasionally come under fire when schoolchildren engaged in the time-honored tradition of looking up profanities and other risqué terms. Most recently, the very same Merriam-Webster was briefly banned from 4th and 5th grade classrooms at Oak Meadows Elementary School in Menifee, California in 2010 after a student located “references to various types of oral sex.” A review committee restored the books to classrooms after a few days of nationwide derision, but henceforth students needed parental permission slips to consult the dictionary.