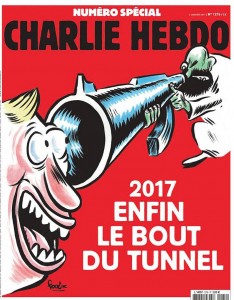 This past Saturday, January 7, marked the second anniversary of the attack that killed 12 people, including five well-known cartoonists, at the offices of French satirical magazine Charlie Hebdo. Below, we’ve brought together a few of the memorials, reflections, and critiques from around the Web.

Says cartoonist and new editor Riss: “Before there were two or three retrograde groups that harassed us. Now we get the feeling that the entire world is keeping an eye on us. As if Charlie Hebdo’s freedom, even when it is exercised modestly, was too much.”

The advocacy site for cartooning freedom highlights several cartoonists still under threat worldwide, including Zunar in Malaysia, Tahar Djehiche in Algeria, Musa Kart in Turkey, and Rayma Suprani, formerly of Venezuela but now exiled in the U.S.

Charlie Hebdo has remained remarkably consistent in a time when freedom of speech is under more serious threat in the Western world than many could have imagined. Dictators like Vladimir Putin and Recep Tayyip Erdoğan have boldly clamped down on journalists, and even the President-elect of the United States of America has openly expressed his hatred for the free press. At the same time, the far right claims that its “tough talk” on Islam, as opposed to the left’s “political correctness,” makes it the true heir of Enlightenment values. Charlie Hebdo is a stark rejection of this political vision. Though no friend of “political correctness,” it refuses the far right’s sleight of hand, which associates the ideals of a country like France with particular ethnic or religious groups. The paper represents a left unafraid to claim Republican ideals as its own.

“Je Suis Charlie,” but your free speech is terrorism (BoingBoing)

Cory Doctorow’s piece is actually from last year, but we regretfully missed it in our one-year anniversary post. Doctorow outlines the irony of the crackdown on free speech in France that immediately followed the attacks. Two years later, in part due to the November 2015 attacks at the Bataclan and other sites in Paris and the July 2016 truck attack in Nice, the country remains under an officially decreed state of emergency that further restricts civil liberties. It is currently scheduled to be lifted in July of this year, after upcoming presidential and legislative elections.

One of the magazine’s most outspoken contributors, Moroccan-born secularist Zineb El Rhazoui, confirmed recently that she has parted ways with the publication because she feels it no longer holds the same line against extremism as before the attacks.

But as EuroNews’ Robert Hackwill shows, the Hebdo cartoonists continue to gleefully break taboos of all sorts. The two-year anniversary cover, above, reads “2017: Finally the End of the Tunnel.”