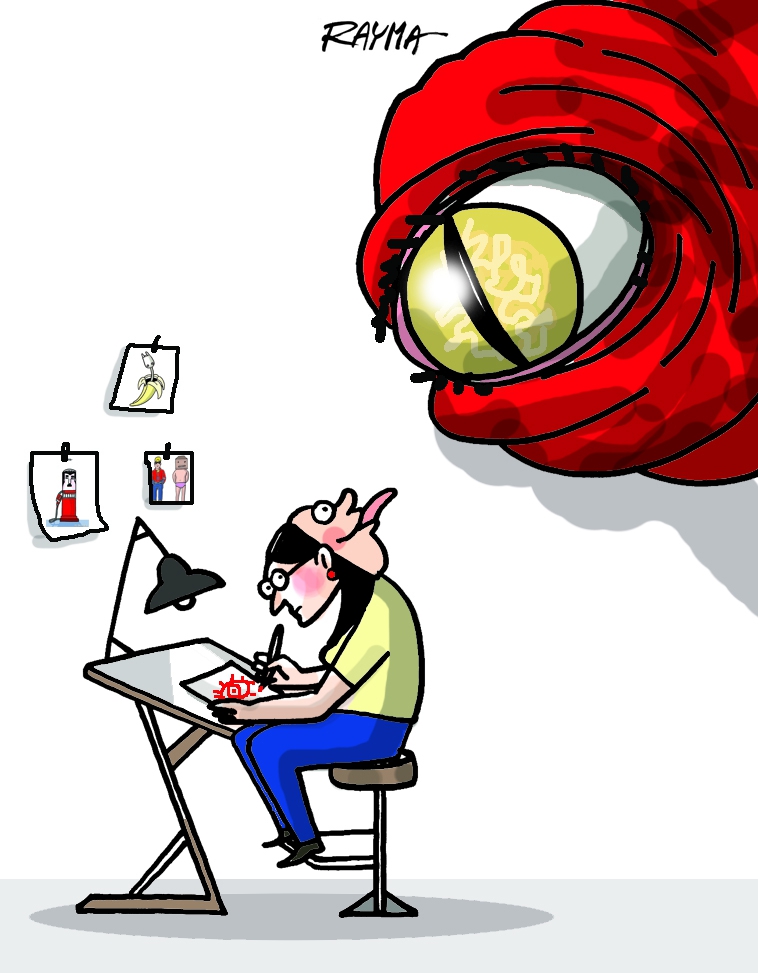 Rayma Suprani has long been one of the best-known and most fearless political cartoonists in Venezuela, but for almost a year she and her work have only been “in” the country virtually, through social media. After El Universal, the newspaper where she had worked for more than 20 years, was bought by anonymous supporters of President Nicolas Maduro in 2014, Suprani was fired in short order and eventually forced to flee to Miami where “I can be more useful [to Venezuelans back home] because my creativity can flow without worrying.”

Suprani had often skewered Maduro’s now-deceased predecessor Hugo Chavez and stood up to the oppression of his populist movement known as Chavismo, but journalist Cesar Miguel Rondon tells PRI’s The World that Maduro’s government is even worse:

They behaved like punks on a street corner. You don’t have the rule of law here. Every single day it’s more openly the exercise of a dictatorship instead of a democracy. So, ‘we don’t like Rayma. Rayma, you should go.’ It’s as simple as that.

The specific cartoon that may have led to Suprani’s dismissal shows Venezuela’s healthcare system abruptly flatlined by Chavez’s signature. After her firing from El Universal she tried to keep working in the country as a freelancer, but soon received death threats with a particularly misogynist tinge, she told PRI: “They’d say, ‘Instead of doing what you’re doing, why don’t you go find a man, a husband?’ Or, ‘You’re just a lesbian.’ ‘You’re a prostitute.’”

Once her picture began appearing on state-run TV accompanied by denunciations from Maduro and his “designated attack dog,” National Assembly chairman Diosdado Cabello, Suprani regretfully decided it was time to leave. Apart from the overall effect on her life, the constant tension and fear was making it difficult to produce any quality work, she said:

Emotionally speaking, I never wanted to leave Venezuela but it became such a risk that I couldn’t live with it. It sort of paralyzed me and now I feel like I’m in a place where I can look at everything from a distance and I can be more useful because my creativity can flow without worrying.

Despite Maduro’s best efforts, Suprani continues to share her cartoons with Venezuelans and the world via her Twitter account @RaymaCaricatura and her website. One of her most recent projects, she told PRI, is “illustrating a book about political prisoners being held in Venezuelan prisons.”