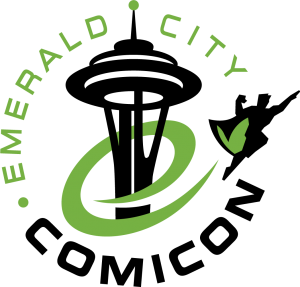 This weekend, March 2-5, CBLDF heads to Seattle, Washington, for Emerald City Comicon! You’ll find us all weekend at booth #737 with an assortment of exclusive premiums and more!

In addition to signed books and CBLDF gear, we’ll have the last remaining She Changed Comics t-shirts and Comics Are For Everybody — created by Jordie Bellaire and Steven Finch — merchandise. Quantities are limited, so don’t miss your chance to get these amazing items before they’re gone!

CBLDF: State of Censorship in 2017
Saturday, March 4 • 1:00 PM – 1:30 PM • ECCC Live Stage – Level 4 Skybridge Lobby
Although free expression is seen as a basic human right, censorship is rampant in the United States and around the world. CBLDF Executive Director Charles Brownstein presents an overview of the censorship crises facing cartoonists in 2017, from the violence and legal prosecution occurring around the globe to domestic attacks on comics and young adult books in libraries and schools across the country. Learn how comics and books are being challenged and what you can do to fight back!

The Powers and Perils of Comics in the Classroom
Saturday, March 4 • 1:30 PM – 2:30 PM • WSCC 3A
Join National Ambassador for Young People’s Literature Gene Luen Yang (Boxers & Saints, American Born Chinese), bestselling comics creators Kazu Kibuishi (Amulet) and Royden Lepp (Rust), and educator Talia Hurwich for a lively discussion of comics in the classroom. They’ll detail how and why comics can be successfully integrated into classroom curricula, and they’ll provide tools that educators can use to counter misconceptions about and attacks on comics. Participants will leave the panel better enabled to advocate for comics in the classroom and their students. Moderated by Betsy Gomez (Editorial Director, CBLDF).